Back in the O.C. and avoiding seeing the Korean horror flick Closet because The Flower wanted to see that as well, I opted for this Korean thriller based on the death of their dictator in 1979. I always feel a little bad on these historical dramas when they cross over into American history, as this one did, because the movie’s all “This is a BIG deal in the United States” but I never remember the events. I honestly wasn’t aware that Korea had a dictator prior to the dictator they overthrew in 1987: When The Day Comes. Piecing it together, I guess they had some poor sap running the joint from 1979-1987, who was different from the guy running it from 1960-1979, with the only commonality being they had to hate The Communism.

America did a poor job messing around in these things. It’s all about hating The Communism, which is certainly necessary but hardly sufficient. 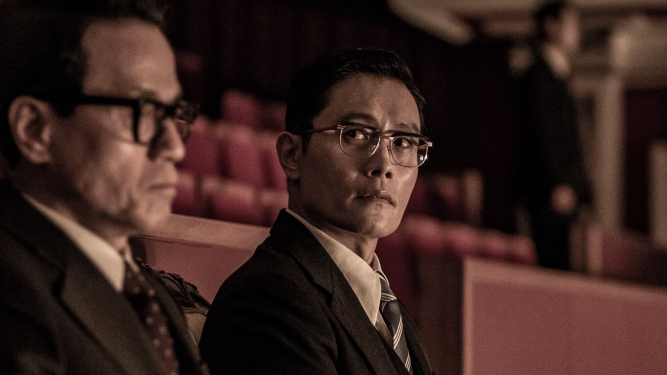 The look you get when you say “I mostly know Korea from M*A*S*H.”

Anyway, this is more Korean myth-building and once again they do a fine, fine job. Here you have a story about corruption at the highest level of government—far more thorough than even the corruption portrayed in the Joeson dramas—but even though our main character is an assassin who ends up killing the leader and throwing the country into chaos, he is the undisputed hero of the tale.

The interesting thing, I suppose, is the recognition that there are degrees of dictators. The Left despises Pinochet, for example, alone among all dictators, but as we learned with No, to get rid of him they…just had to hold an election that he lost and he stepped down. As opposed to the kind of dictators the Left loves, who only step down when murdered. 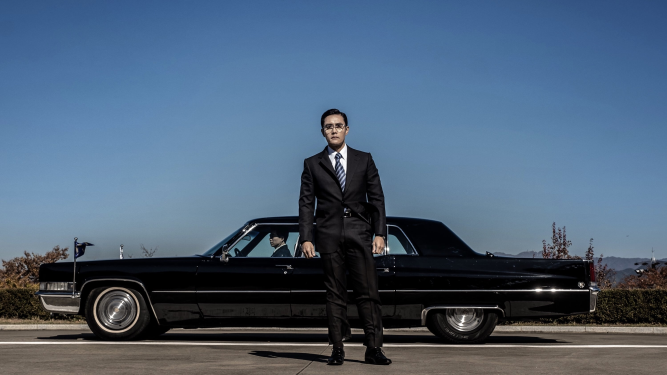 This the man. He’s standing. And he’s next.

But this story is interesting because our dictator, while bad, isn’t the worst. There is some freedom in Korea and the problem comes when civil unrest results in riots, and the dictator decides to go along with his more iron-fisted, murderous advisers, figuring a few million dead countrymen is better than not being in control of the country. Our dictator’s primary gag seems to be to (obliquely) tell one of his advisers to terminate a problem with extreme prejudice, then to hold them up as criminal and traitorous for having done so.

It’s entertaining. There are little bits of interest that stand out. Our hero is the head of the Korean CIA which is known as…the KCIA. Heh. Parts of the movie take place in France and my old man’s beloved Citroens are everywhere.

This is the sort of movie that would’ve lost the kids, but I mostly did pretty well following along. I confused a couple of characters early on. And there was a point where someone has to die, and there are two factions duking it out for who gets to kill him. The hero goes through a lot of trouble to make sure his team pulls it off even though, at that point, he must’ve known it was going to be his death knell. Then again, maybe he didn’t know that but then why be so adamant to be the one who did do it?

I don’t know how close it is to the real thing, but as I said, it’s a good myth. The Korean notion that there’s always one man willing to sacrifice everything to straighten out their perpetually flanged-up government isn’t a bad one. I liked it, but I was sorry in retrospect to have missed Closet. 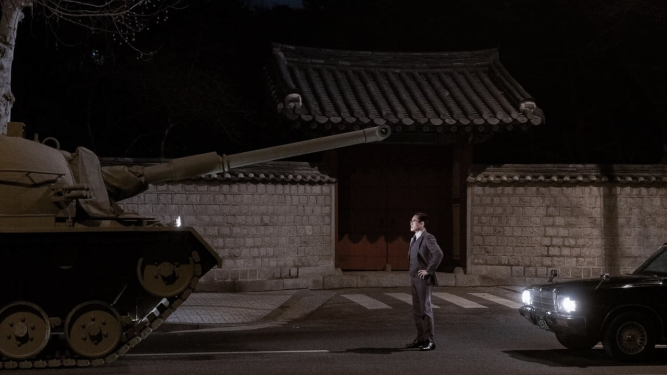 “Just admiring my parking job.” (Double-parking a tank is either very challenging or very easy.)