It is sometimes hard to drag The Boy to see certain pictures, but sometimes I can wedge one in that he would normally be cool on, if the options appear to be even worse—as in this week, when the best rated new option was How To Change The World, a documentary about Greenpeace. I had been proposing we see this movie for the past month or so, but it was only after other options had been ruled out and he had forgotten that he didn’t want to see The Visit that we finally made it.

M. Night Shyamalan brings to mind a few directors, like David Lynch, who are successful almost entirely by accident. For example, when the country went crazy over “Twin Peaks” and “Who killed Laura Palmer?” I said—never having seen the show, but being somewhat familiar with Lynch’s oeuvre—”If you think the show is a murder mystery, you’re wrong and you will be disappointed.” Sure enough, the second season killed the show, I presume because Lynch went on to tell the story he wanted to tell, not the one the audience wanted to see.

Shyamalan, on the other hand, who has a sure hand at the tiller and a way of getting great performances out of kids (in particular), seems to have been wrecked by The Sixth Sense, and has spent most of his career chasing that killer twist. In suspense terms, sadly, this has translated to “I wonder how MNS is going to screw this one up?”

Even now, you can see a huge focus of the commentary on this movie is based entirely around “the twist”. What will it be? Did you guess it? It was great/bad/whatever. 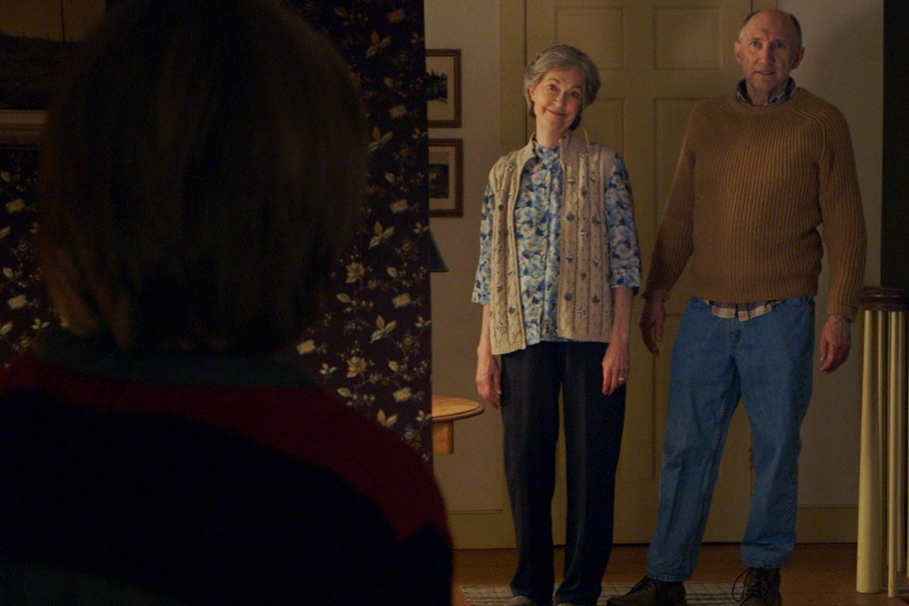 I’m not saying it was aliens but…

Interestingly, The Boy had been spoiled, figuring he wouldn’t see the film, and he still liked it. I did not see it coming until shortly before the reveal, which is as it should be.

But it’s solid: One of the frustrating things about MNS is that he is a good filmmaker who has made some really, really awful films—again, I suggest that stemmed from him trying to recapture the lightning that was The Sixth Sense, and again, that’s unfortunate. This $5M self-financed movie is his best since Signs, and features two likably precocious kids and two likable but oddball grandparents. (The mom is also likable but not in the movie much.)

The premise is that the kids want to meet their estranged grandparents. The mom doesn’t want to let them go, but (as we learn quickly) the kids are also motivated by getting their mom off on a cruise with her new boyfriend. Their father left five years ago, and since it was the father who caused the estrangement between grandparents and mom, there’s a real emotional backstory. This story breaks through at several times, so it’s not the usual horror-movie-tactic of “make the audience care about the characters before you kill them.” It really matters and resonates at various points throughout.

Well, things get weirder and weirder, and the kids get scared-er and scared-er. The climax is pretty intense, but if I were going to fault it, I’d say the director lacked the ferocity needed to make a really scary movie. There are a few starts, some great creepy moments, and (as noted) a satisfying resolution. But the movie backs off at times—again, I felt because the director also cared about the characters, maybe too much. 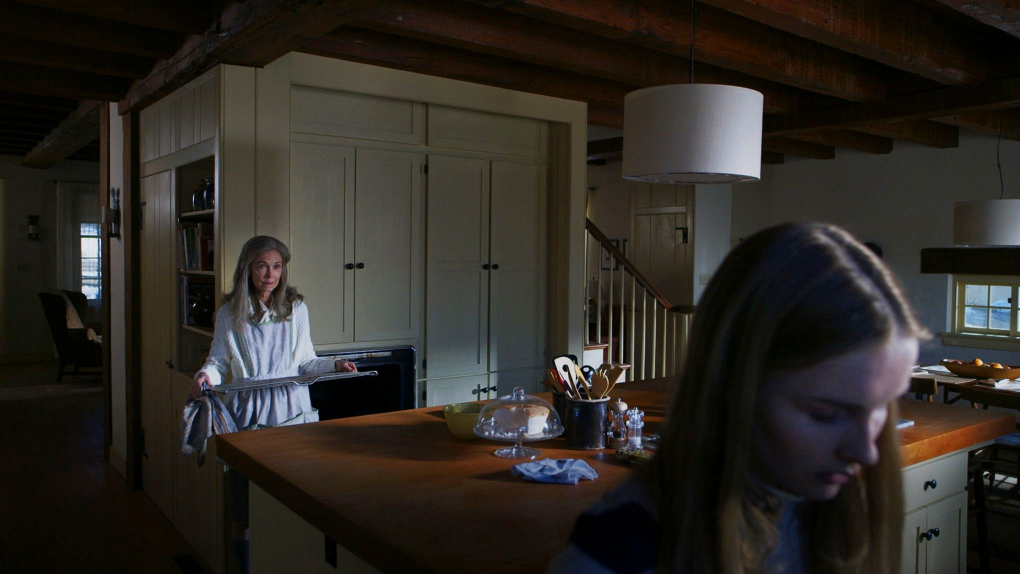 Nothing strange about insisting your granddaughter climb bodily into the oven to “clean” it.

Meanwhile, Shyamalan uses his (self-financed!) $5M budget expertly: This is a found footage movie, which is common enough in low budget horrors, but the amusing aspect of it here is that it’s an artistic statement, not a financial one.  There are cuts, there is good blocking, there is an overall film quality that belies the little cameras that the kids are carrying around. I’m fine with that. It makes the movie a lot better looking and more interesting.

Also, the audio is clearly overdubbed. And I’m fine with that, too.

There’s also a fair amount of meta-content, as the granddaughter is making a documentary about her mother’s split with the grandparents, and she references movie terms even as the movie is relying on those techniques. “This will be the denouement.” Heh. 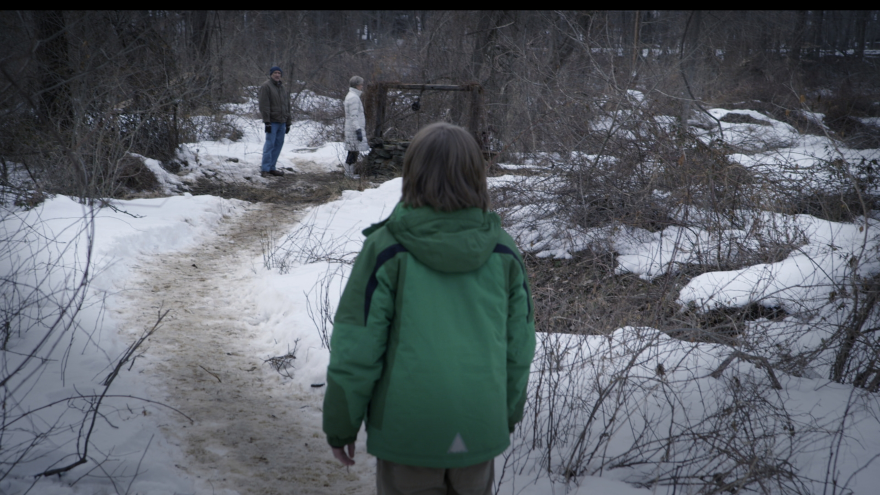 Telling your grandson to climb bodily into the WELL to clean it, now that’s just odd.

The acting is wonderful. Olivia DeJonge is heartbreakingly beautiful and sensitive as the granddaughter/future filmmaker, and Ed Oxenbould plays the often snotty, rapping, big-talking younger brother without you wanting to kill him. He actually recalls a young Leo DiCaprio. Veteran character actor Peter MacRobbie plays the sometimes sensitive, sometimes depressive, sometimes menacing “Pop Pop” excellently. And, if I’m not mistaken, and I feel like I must be, the 75-year-old Deanna Dunagan performs with the agility and energy of a much younger woman—though I see no stuntwoman listed. I mean, she did a great job as the nurturing, yet increasingly off grandmother, but I was flabbergasted at how she seemed to be able to crawl around playing hide-and-seek with the kids.

I might note, somewhat sardonically, that the most terrifying moment is where Nana tells a story about aliens and I’m thinking, “Oh, crap, it’s gonna be aliens!” but in truth, I have nothing bad to say about this film. All the ingredients mixed together to make a good, if not great, time.

And I’d much rather see Shyamalan make these kinds of movies than more Airbender and After Earth type stuff. 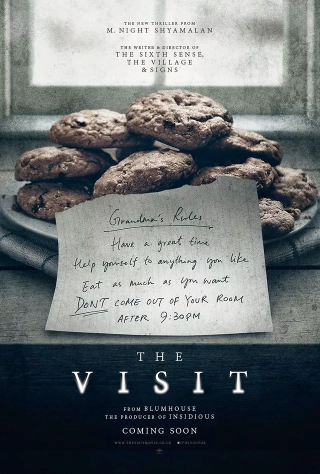 Don’t come out of your room after 9:30, and don’t feed your grandparents after midnight.