I’m over a month late on this, but Carroll Baker turned 78 last month, and I wanted to note this momentous occasion. Baker was a sex symbol back in the ‘50s, making an Oscar-nominated splash as the eponymous Baby Doll, and having a respectable career into the mid-’60s. Then she went off to Europe and did a bunch of Giallo films before returning to America in the ’80s and ’90s to do a whole bunch more parts.

A working actress, in other words. Our favorite kind here at the ‘strom.

Astonishingly, though despite vamping her way through the height of the pointy-breast era, I couldn’t find a single picture of her in a torpedo bra. In fact in a world of Monroe rip-offs, Baker was a modest, marvelous B-Cup.

Well, what do you think? 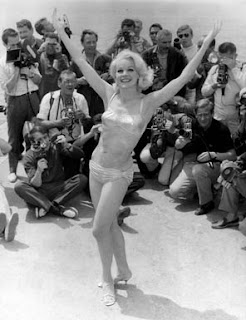 Not bad, eh? Elisha Cuthbert bears a superficial resemblance, but we’ll see how Cuthbert’s doing in 2060. Er, well, those of us still alive, anyway.

–the 1941 Hitchcock screwball comedy, not the weird Pitt/Jolie action comedy of 2005.

The woman completing this pair was Carole Lombard, after whom Frances Lillian Mary Ridste had styled herself upon arriving in Tinseltown (to my perpetual confusion half-a-century later). And like Landis, Carole Lombard died far too young, though in an airplane crash.

Behind the lens we have a young(ish) Alfred Hitchcock, shooting his only corpse-free comedy. In this case, the shallow Montgomery and the bat-sheet Lombard discover that they’re not married, despite three years of great make-up sex. (For reasons that aren’t exactly clear, Montgomery hides the info from his wife, and Lombard gets ticked, apparently because he wants to have his way with her even though they’re not legally married.)

Lombard–who really does come across like a screwball–decides she doesn’t want him back and ends up with his business partner, the bland, staid Gene Raymond.

This is really a cute movie with some good laughs that are a little too far apart to make this a really good comedy 65 years later. In other words, it might have been a lot funnier when released, but a lot of the sexual innuendo is nearly imperceptible to our coarsened sensibilities. Still, we all laughed at points, even The Boy.

I liked the early scene where they’re having dinner at a place that has become a dive in the three years since they’ve been there and Montgomery is trying to get a cat (that’s sitting on the table!) to test the soup to see if it’s safe to eat. (Hence the quote.)

And since it’s been a while…some breasts! 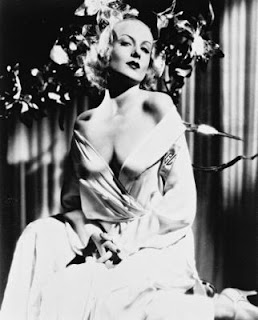 Lombard is of course pre-pointy-breast era. She’s the right age to be a flapper but I don’t think she did the flapper thing in the movies.

Had she lived, though, I’m sure we’d have seen her in a torpedo-shaped brassiere alongside of the other greats of the ‘50s. 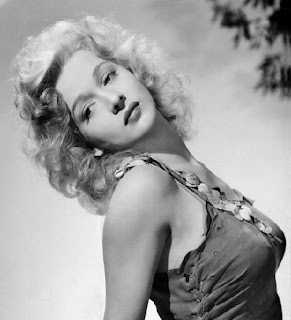