Ben Mankiewicz claimed in the buildup to this that he preferred it to Star Wars which…well, I can relate, I guess. It’s not boring (like the early parts of Star Wars), the acting and dialogue is way better, and the action is passable. Also, Sally Field is cuter than Carrie Fisher.

OK, I can’t really back that last one up. But Sally Field is real cute in this, and it’s not a lie to say I remembered exactly one thing about this movie. 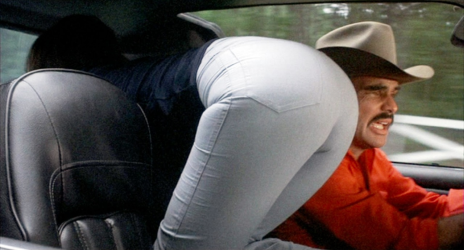 “So, when did you first realize you were heterosexual?”

Yep. Sally Field’s butt. It’s the only thing I didn’t remember in the abstract. Like, I knew Burt Reynolds was in it, but could I have distinguished it from any of the innumerable follow-ups? I mean, Smokey and the Bandit II, Smokey and the Bandit 3, Cannonball Run, Cannonball Run 2, Stroker Ace…oh, and Hooper! Hooper even had Sally Field in it, too. (And Jan-Michael Vincent, though that’s not really germane.)

So, I warned the kids, as I sometimes do, but 40 years later the movie holds up pretty well. It’s not great; it was never great. (Sorry, SatB lovers.) But it’s fun, and it’s an amazing time capsule.

The plot (which, honest, I’m having a hard time remembering now) is apparently that The Bandit (Reynolds, duh) gets an offer from Big Enos (Pat McCormack, character actor/TV gag writer) and Little Enos (Paul Williams! the songwriter!) to make a beer run. For $80,000, they’re going to run Coors from Texarkana to Atlanta in 28 hours. “They” being The Bandit and Cledus (played by Country/Western star Jerry Reed, who would win the coveted People’s Choice award for his performance).

Back when you just had to dress people alike to make ’em look like kin.

Along the way, they pick up city girl Carrie (Sally Fields) who’s fleeing from a shotgun marriage (!) between herself and Junior (Mike Henry, famous handsome man who played “Tarzan” in the ’60s and “Hotlips” fiancee in “M*A*S*H”). But if Junior is heartbroken, his father Sheriff Buford T. Justice (Jackie Gleason, stealing the show) is livid, and more than willing to chase The Bandit across several states, well out of his jurisdiction.

It’s all just a set up for driving, stunts, driving stunts, sight gags, jokes, some colorful language, and a palatable romance between soon-to-be-serious-real-life lovers Reynolds and Field. Fluff, all the way, except for one sort of fascinating bit about which not much is made.

At one point, when assessing their romantic prospects, The Bandit and Carrie each list various cultural shibboleths: “Chorus Line”, Richard Petty, Casey Tibbs, Elton John, Waylon Jennings, and so on, noting how they don’t have much in common. The Bandit says something about where you’re standing in the country having to do with how dumb you look. It’s not an original thought, of course, being as old as America (and older than the U.S.A.) but, man, does it resonate today. 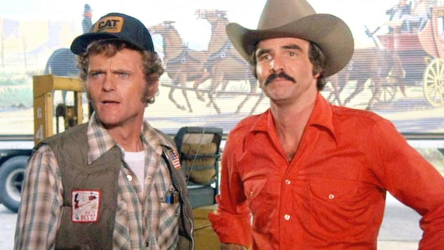 Sort of the way the whole “Why the hell can’t you just buy Coors in Atlanta?” resonates. Although, for a different reason than you might suspect: Back in the day, Coors prided itself on making good beer and worried it wouldn’t stay fresh on the trip, so they just didn’t sell it. It was illegal only for tax reasons, I guess. Not exactly bootlegging in the ’20s. Coors actually made a conscious, corporate shift toward making bad beer, figuring they would be part of a 3-company monopoly.

But around this time, Carter deregulated the beer industry, and today there are hundreds of craft breweries countrywide giving them a run for their money, though obviously Coors Light is still a big player.

The kids enjoyed it. It’s a lot easier for me to enjoy today, I think, because the memories of the numerous awful spin-offs have faded. 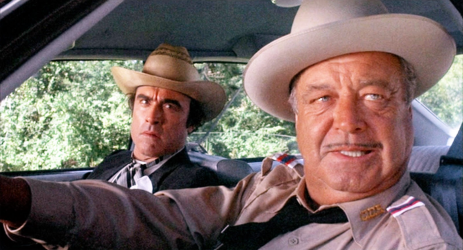 I think SatB3 JUST had Gleason in it.