My long-running gag whenever reviewing a French film is to wait until the movie strikes its inevitably libertine sexual plot-point and say, “I know, right? French!” Foreign movie distribution is a funny thing, and we seem to get movies from particular countries in streaks, so it’s been a long time since I’ve seen a French movie (that wasn’t part of a revival), and My Donkey, My Lover and I throws a curveball in my well-worn saw.

Our protagonist is Antoinette, a young—wait, we’ll get back to her age—sexy school teacher carrying on a torrid affair with one of her students’ parents. In fact, when we meet her, she’s changing (in her classroom, after instructing her students not to peek) into a sexy dress so she can lead them in a song which is just wholly inappropriate for the 2nd graders (approximately) that they are. But which goes over really well with the crowd of parents because, y’know, France.

Her illicit plans are shattered, though, when she discovers that the wife of her lover Vladimir has scheduled a journey across the Cevannes—the same journey made by Robert Louis Stevenson as a young man in an attempt to cure him of his disapproved-of attachment to an older woman. Antoinette settles on a mad plan: She’ll also take this journey and “coincidentally” run into Vladimir and his family.

Now, this is already French up to the gills right? Except there’s a slight air of disapproval about the whole thing. Wait, that may be too strong: There’s a less than hearty endorsement of this affair, as opposed to the usual “sophisticated” view of the French. Maybe it’s just the recklessness of the act that could cause a family breakup? But I’m reading too much into it.

“I’m chasing my married lover and his family through the mountains” is apparently a good opener.

The point of the story is how Antoinette learns to re-view her life through her relationship with a donkey. I liked this because it’s sort of gently mocking. I felt like writer/director Caroline Vignal was sort of taunting the viewer a bit: “I dare you to take this donkey as an allegory,” she’s saying. “Because it is! Except when it’s just a donkey.” Ultimately, this works as a story of a how a rather self-absorbed woman learns to get just a bit outside herself by being forced to deal with an animal that demands her attention in the here-and-now.

This works in a large part because Lauré Calamy (as Antoinette) is very appealing, without being lionized. You can see how she ended up where she was. You can get caught up in her passion without exactly admiring it. You can laugh at and with her as she deals with the donkey. And mostly with. She seems so genuine and harmless that when she goes up against The Wife—who is perfectly within her rights and defending her family—you feel sympathetic for her ever getting entangled (even though it was very much on her). The husband ultimately comes off as a jerk, which is fair. 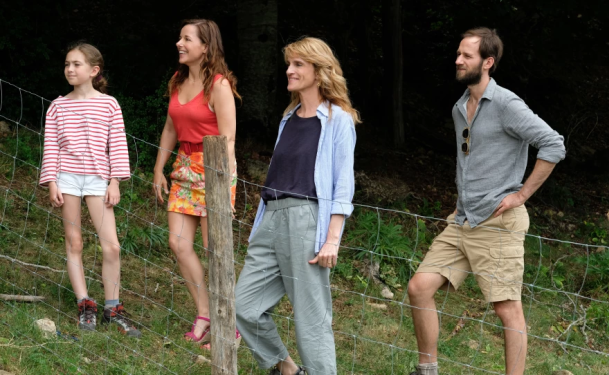 Our heroine with the family she’s planning on wrecking.

Now, the funny thing is Calamy is beautiful in a girl next door way (if France is next door). She’d never make it in Hollywood because she has greater than 5% body fat (which I sometimes suspect is at the root of why European actresses look better longer without drastic work being done). And, doing the math, she was 44 when she filmed this in 2019! Yet her character’s practically an ingenue. The wife of her paramour is about six months older, on the other hand, and looks much older than 44. The actor playing her husband is actually 34…I don’t know what’s going on here!

Probably they just got people who fit the idea of what they wanted to portray and hired appropriate actors without stressing about calendars. The Europeans are like that. And it all works. Olivia Cote as Eléonore is likable—but don’t mess with her. Benjamin Lavernhe de la Comédie Française—which is how he’s billed, so I guess he was on loan—is very charming but also kind of a shallow jerk.

The Guardian reviews this as “Eat, Bray, Love”, which I am FAR too sophisticated to not think of and then steal.

And our Antoinette? Well, she’s also pretty shallow, but likably so.

With all these vaguely moral undertones it wasn’t until the third act—when we discover that sex with the wrong person is remedied by sex with the right person that I felt like I could really trot out the old I know, right? French! saw.

I feel like it’s basically a shallow movie overall, and it gets by on charm, but then again, so what? That’s not such a bad thing.