Hirokazu Koreeda, the Japanese director who won our hearts with such films as Like Father, Like Son and Our Little Sister is back with a new look at modern Japanese family life. In this case, our protagonist is Ryota, a shiftless, gambling divorced dad, a one-time writer who works as a detective specializing in collecting incriminating information for divorces—”for the material”, he claims, though he hasn’t written in years, and when we first meet him, he’s shaking down a wandering wife for cash and lying to the husband (his client), turning a dubious profession into a straight-up dishonest one.

A face you can trust?

It’s a change from Like Father, where the characters were largely noble and struggling to what was best in a situation they had not created. It’s also a change from Sister, where the characters initial noble appearance had an uglier aspect underlying it (though they were not bad people, in the end). In this case, Koreeda is giving us a highly flawed character to sympathize with, without trying to entice us into sympathizing with his myriad sins.

Koreeda’s problem (besides all the obvious ones) is that he wants to be a father to his son, but he can’t make the support payments and, apparently, in Japanese society, if you can’t make the payments you don’t get to see your kid. The common reaction to this seems to be, “Yeah, just drop out of the kid’s life until he’s 18. If he wants to meet you then, he’ll turn up.”

The fact that Ryota is appalled at this prospect—perhaps the one truly decent instinct we see in him, and one that society seems determined to squash—makes him instantly more relatable as a character, even if his big idea for getting all the back support money is to bet on the races. (And, since this is Japan, he goes to the local velodrome to bet on bicycle racing. I don’t know why I found this weird, but I did.) Ryota still pines for his ex, who is trying to move on by dating a square. (A perfectly reasonable reaction, one supposes, to having been hooked up with a “spontaneous” artist who might blow the rent on a bicycle race or lottery tickets.)

His mother and sister don’t think much of him, either.

Ryota’s mother—from whom he would steal, if his shrewish, unpleasant sister hadn’t re-hid all her mother’s money, knowing Ryota would come looking for it—while emotionally undermining in a lot of ways, is also very interested in seeing the two get back together.

A curious plot point involves Ryota having an out: He has a standing offer to write manga (or perhaps a “light novel”), but he can’t bring himself to do this, even under a pen name, which (we are told) is how it’s commonly done by “serious artists”. (What a terrible designation to place on an artist, eh? “Serious.”)

The Boy and I liked it, overall, though it didn’t grab us the way the previous two films did. We’re highly likely to go see the director’s next film, The Third Murder, however. 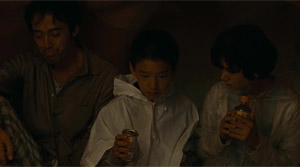 You hope it works out. It’s hard to see how it can, though.