The Flower, who now towers over many adults, has a very particular sensibility with regard to film. Unlike The Boy, she has to be rather motivated to go to the movies, since time away from her desk means time away from whatever art she’s doing (and she’s doing a lot). She’s far more inclined to see classics than new films because, well, why risk it? Her favorite movie growing up was Gran Torino (which many thought was odd for a child) but recently, she has come to adore Silence of the Lambs. In fact, we debate as to the relative merits of Lambs versus its Best Picture Oscar-contender that year, Beauty and the Beast (which has to be the greatest match-up since Star Wars went up against—and lost to—Annie Hall).

Somewhat less probably, she has come to be something of a Stanley Kubrick fan, loving both The Shining and A Clockwork Orange: In this case, I think Kubrick’s aesthetic sense wins her over more than the particular narratives, but since our theater was having a Kubrick month, I figured I’d soon find out.

Dr. Strangelove is probably a good place to start, I figured. I actually have never “got” the hubbub about this film. I mean, I can see it raising a ruckus in 1964, but does it really hold up? I was honestly unsure whether I’d seen the whole thing, so this would be a good chance for me to revisit it (or just visit it), too. 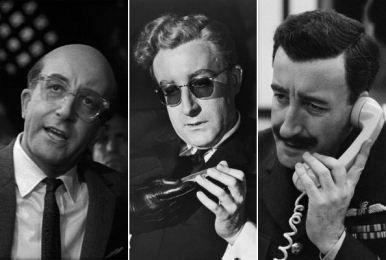 Welp, hadn’t seen it, except for a few iconic scenes. You know the ones.

And it is really, really good. Is it his best movie, as often listed? I don’t think so: It’s overrated in that sense. His greatest movies, I would argue, are ones where the narrative serves the aesthetic, not where the aesthetic is subordinated by the narrative. I mean, let’s face it, The Shining (1980) has virtually no narrative at all not shared by hundreds, if not thousands of not just worse but utterly forgettable films. (Guy with axe wants to chop up his family?) A Clockwork Orange (1971), for all its sci-fi dystopianism isn’t much more than an inverted revenge flick. 2001 has a story, I’m told, but nobody really knows what it is. 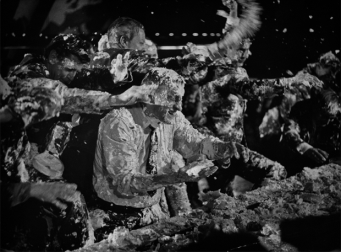 But I think it’s foreshadowed here in this deleted scene when George C. Scott says, “My God! It’s full of pies!”

Point is, if you like Kubrick, you like his style. If you look at IMDB and compare to Rotten Tomatoes, you’ll see that they rate his movies entirely differently—except that both have this one as #1—which I think reveals that when you’re dealing with that sort of artistic excellence, it’s difficult to really say that this is better than that. And I suspect as the Boomers die off, this film will sink in prominence, somewhat.

Although, frankly, as I was watching it, and laughing, I thought about how uncomfortable I’d feel if I were watching it in 1964. Holy crap. Sidney Lumet’s Fail-Safe was released the same year—but later, at Kubrick’s insistencelawsuit, apparently—and apparently everyone laughed at it. Fail-Safe is not a funny movie; it’s a serious version of this movie.

But, again, if I were watching it in 1964, I’d have laughed, too. Because the alternative is too horrible to contemplate. 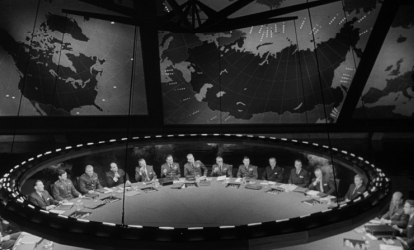 Anyway, this is not a subtle film. Dr. Strangelove, played by Peter Sellers, just for obvious example. (And mustn’t he have been kept on a tight leash to work with the notoriously fastidious Kubrick?) Then there’s the guy who starts all the trouble, General Jack D. Ripper played by Sterling Hayden. And George C. Scott as the general who’s fond of young women, Buck Turgidson. Colonel Bat Guano. Major King Kong.  I mean, really.

Despite all this ham-handedness, the movie somehow works. I can’t really explain it. Maybe Kubrick’s deadly earnest camerawork pulls the whole thing out of fatuous camp and into a more elevated satire. I don’t know, but we all liked it: The Boy, The Flower and I, and (I’d like to think) Slim Pickens’ daughter, who was there in the theater with us. 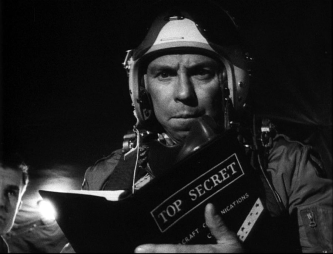 As, I like to think, was Mr. Pickens, at least in spirit.

3 thoughts on “Dr. Strangelove or: How I Learned to Stop Worrying and Love the Bomb (1964)”