Well, here ya go! A nice little English movie with established actors and producers and what-not that does what nice little English films should do: Treat us to an adventure with fun characters living their quirky little lives and “taking the piss” with (with? on?) overbearing government bureaucrats. This is a time-honored tradition in England, even if it only results in more bureaucrats over time. 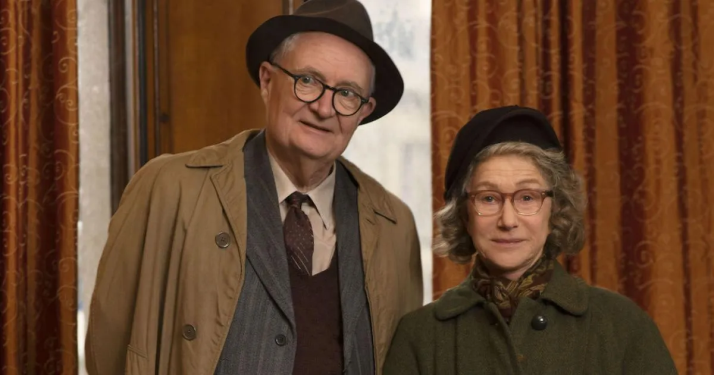 Kenneth Bumpton (Jim Broadbent) is a poor old crank living in a cruddy English village, unable to hold down a job because he’s just got so many damned opinions about everything in the unjust world of 1961, while his long-suffering wife (Helen Mirren) pleads with him to just do something to help out their actual household. They have a son who’s got ambitions to be a boat-builder (which ambitions seem to be out of his class, ’cause England), an older son who’s dodgy, and they also have a deceased daughter Mrs. Bumpton doesn’t want talk about.

When the movie opens, Kenneth is on trial for stealing a very expensive painting of the Duke of Wellington. Flash back six months and we find that among Kenneth’s hobby horses of worker rights and racial justice, he really thinks TV should be free for old people, and he expresses his opinions by writing (presumably) bad teleplays and sending them to the BBC and also by setting up petitions no one signs. He harasses TV fine collectors by arguing his TV can’t get the BBC and therefore he shouldn’t have to pay the tax. (He’s removed something from the TV but I wasn’t sure—I mean, a tuner is a tuner, right? You can’t really remove the “BBC piece”, can you?) He rails at the news story that government paid millions for an old painting instead of using that money to give old people and vets free TV. 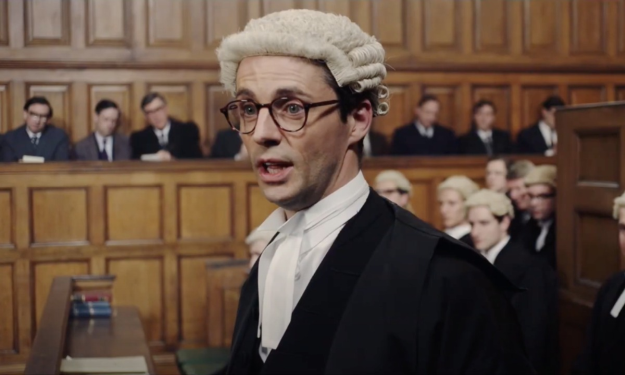 I assume the whole wig-wearing thing is a flex: “We dare you to laugh at our beautiful white curls.”

He promises his wife he’ll settle down after taking one last stab down in London to make his point heard. After the trip turns disastrous, the titular painting goes missing and turns up in Bumpton’s house. He tries then to ransom it for the money to go to the cause and, as we see from the opening scene, ends up on trial for grand larceny.

I question the whole goal of getting TV to seniors so they won’t be lonely. To me that would be a nightmare scenario. Lord knows the Marxian revolution Bumpton imagines has been a nightmare scenario to everyone who managed to survive one. His efforts to stand up for his “Paki” co-worker had a very good chance to get them both fired, so even when his heart’s in the right place, his follow-through could use some work.

But you can’t help but like the guy, and his wife, and that’s what makes the whole movie work. The little guy fighting against the system lands a blow against all odds and manages to embarrass it quite nicely. David & Goliath-type stuff. I feel like most modern governments would just drone him, so as bad as the U.K. was back then, I think we’re in a much worse place as far as tyrannical rulers, and on that level it’s easy to sympathize. The sub-plot with the dead daughter gives things a little emotional depth they would not have otherwise had, and the resultant breaking down of Mrs. Bumpton’s barriers toward speaking of it gives Mirren a good arc to sink her teeth into. Subtle, yet moving, played perfectly off Broadbent’s character’s larger emotionalism. 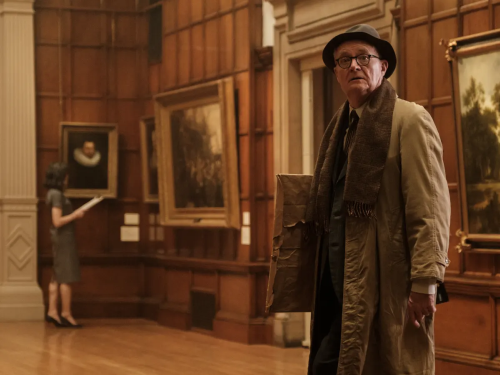 When stealing art, be sure to bring a large enough overcoat.

Broadbent and Mirren ooze charm, of course, and even though they’re too old in calendar years for the parts, they’re just right for 1961-era 60-ish people.

It’s English and as one expects, the acting is good down to the extras in crowd scenes and the pigeons in Piccadilly Square.

The last film of director Roger Michell, who probably hit his peak popularity around the turn of the century with Changing Lanes, Notting Hill and Venus. Not a bad one to go out on, really.

I think this was technically released in the US for the 2022 Oscar season so I don’t think it got the nominations the producers were hoping for, and I don’t think it quite cleared its $14M budget, though it did score some noms in the AARP movie awards. I’m not making that up.

Still, worth a watch. 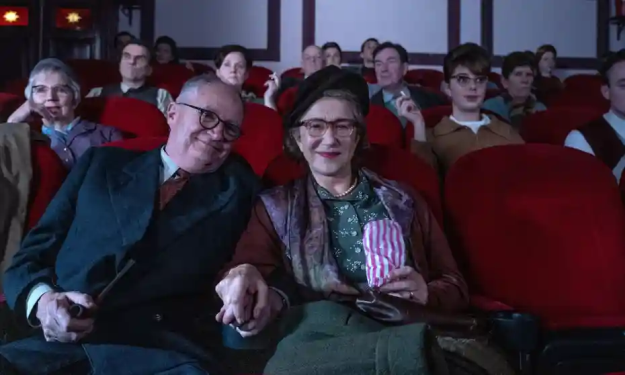 Mirren’s probably wise to the popcorn trick by this point.