Imagine, if you will, a kind of John Wick story where instead of being an assassin, he was a chef, and instead of his dog being killed, his truffle pig is kidnapped, and instead of shooting everyone who gets in his way, he instead devastates them with psychological and culinary insight. That’s Pig. Also instead of Keanu Reeves, it’s Nic Cage. (Not to be confused with the 2019 Iranian flick Pig, the sadly overlooked satire of the Persian establishment and film industry.)

It means very little at this point, I suppose, but this is the best new American film since the lockdowns.

Fun fact: Nic Cage does NOT use makeup. When a scene calls for him to be beat up, he has highly trained professionals beat him until the correct effect is achieved.

Now, some people don’t care for The Cage, who gets a whole lot of memeing for his freakout roles, like Mandy and much, much less for his understated and powerful performances like, oh, Matchstick Men, and gets almost no acknowledgement at all for when he has an understated performance where he breaks out the crazy as appropriate, like Joe—or, say, something like Color Out Of Space, where he’s even-handed to the point of  madness. So I suspect he won’t get the accolades he deserves for Pig where his personality is that of a normal (albeit severely depressed) man who has opted for living life as a hermit.

Cage plays the once famous chef, Rob, who acts as a supplier of truffles for Amir (Alex Wolff, From Up On Poppy Hill, Hereditary) in a pretty sweet deal for the latter: According to Truffle Farm, truffles retail from anywhere between about $40/lb. for the cheap ones and over $1,500/lb. for the pricey ones. Judging by Amir’s car and watch, etc., he’s doing okay for himself reselling the truffles, given that his Master Restaurateur/mobster father (Adam Arkin, The Sessions, A Serious Man) has cut him off. OK, he’s not really a mobster (I don’t think) but given the cutthroat food service industry he may as well be.

While Rob’s odyssey through Portland is unusual in a lot of ways and, yes, somewhat reminiscent of John Wick, it’s more of a condensed reality than a surreal one. That is to say, the whole movie takes place over 3-4 days, and you see some strange things but nothing fantastical. About halfway through, Rob makes a speech about Portland’s inevitable demise due to a massive earthquake and subsequent tsunami, and I thought, “Well, is this why some people are gaga about this movie?” Nihilistic speeches don’t really ring my bell, though I had been entertained up to that point, I was worried the movie was going to just slide into pretentiousness.

And some of you might feel that it does, to be fair, but that monologue is the first of several—and the only one that’s nihilistic. It reflects Rob’s depressed state where every other action or speech shows something greater underneath.  The next speech Rob gives on his journey is to a financially successful chef played by David Knell. Knell did most of his film and TV work in the ’80s—he was the lead in Sean Cunningham’s teen-sploitation “classic” Spring Break and had small roles in Splash, Total Recall, Turner and Hooch and so on—and his part here consists primarily of listening to Cage strip him bare. It’s a truly great bit of acting, and par for the course in this film where “there are no small roles”. (A lot of credit has to go to David Blackshear, senior editor, and all the editors who make these difficult scenes pop.) 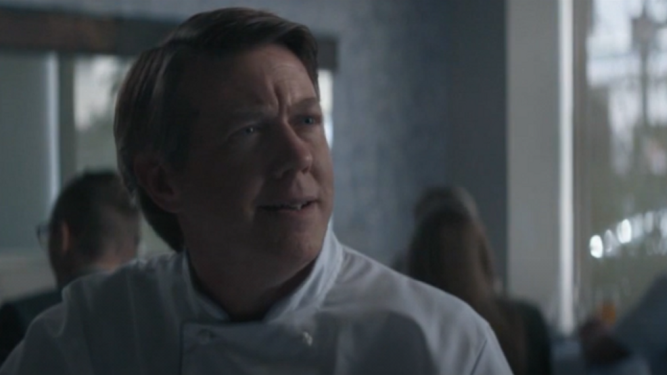 TFW you’re a successful fraud listening to your life being deconstructed.

When Rob comes out of the forest, he connects with Edgar (Darius Prince) who’s doing the Paul Giamatti role. (I briefly wondered if it was Giamatti, but then I just decided I sort of expected him to be there, and then The Boy asked me after: “Hey, was that Paul Giamatti?”) Alex Wolff has to be the sorta “normal” guy to Cage’s forest hermit. Arkin, of course, knocks it out the park with a role you see going one way which then flips to another. There are small, moving roles played by Dalene Young (a prolific writer of teleplays in the ’80s and ’90s) and Gretchen Corbett (who might be known to your grandparents as “the girl who played Jim Rockford’s lawyer”), and every part is done with care and attention to details that elevate the whole.

For example, Young’s character (who run a mortuary/wine cellar?) is masked by shadows, while Cage and Corbett’s interactions are done from a high-angle medium shot. It conveys very well the idea that these are characters from the past, like the shades Ulysses encounters in Hades, though it’s inverted since Rob has more or less consigned himself to a living death. 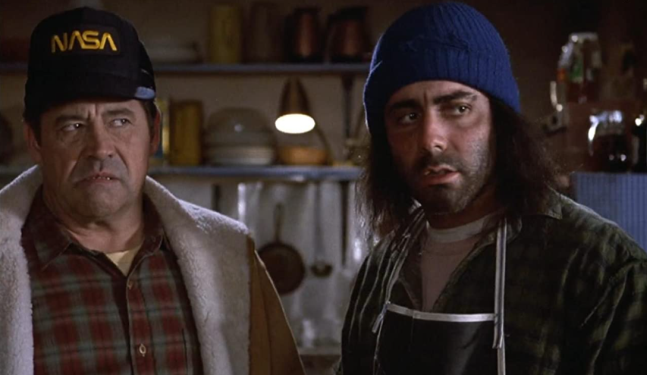 And there’s something else I noticed: The story is about identity. Two things about this shocked me. First of all, it’s actually about something, in a way that’s reflected not just narratively but in the construction of shots and atmosphere. Second of all, it is fairly meticulous in its approach. Amir is the obvious candidate: He wants to be someone who can win approval from his father, and he’s so far gone down this path we almost never get to see the real him. But so is Finway (Knell) and Amir’s Dad (Arkin), and ultimately so is Rob. A third shocking thing, and probably why this movie will ultimately be ignored, is that it’s genuinely about identity and demonstrates the hazards of following fashion to please an unthinking, uncaring mass—a totally off-brand and even radical message for an American film.

But everything in the movie pays off, ultimately. (Well, maybe not the Fight Club thing.) Down to the level of something I noticed in the very opening scenes where Cage is truffle-hunting with his pig—a detail which I think most filmmakers would expect you to overlook—is revealed to be essentially the keystone of the whole thing at the end of the second act.

Damn, son. That’s filmmaking. We liked it a lot, and we liked it even more as time passed. 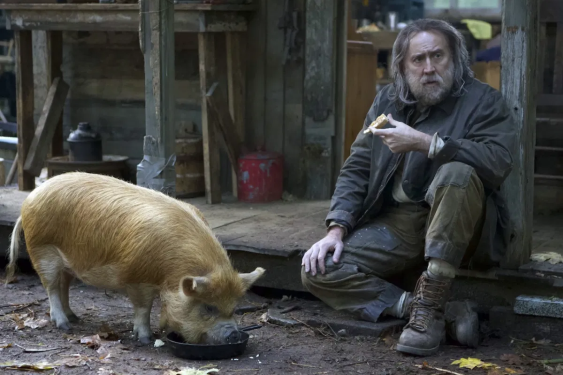