In terms of percentage, the most profitable modern “universe” is probably not the MCU, but the, uh, Conjure-verse. Begun back in the halcyon days (ha!) of 2013 the eight or so films have a combined budget of approximately $200M with a gross of $2B, meaning they brought in about ten times what they cost to make. By comparison, for the Marvel Universe to accomplish that it would have to rake in about one trillion dollars! 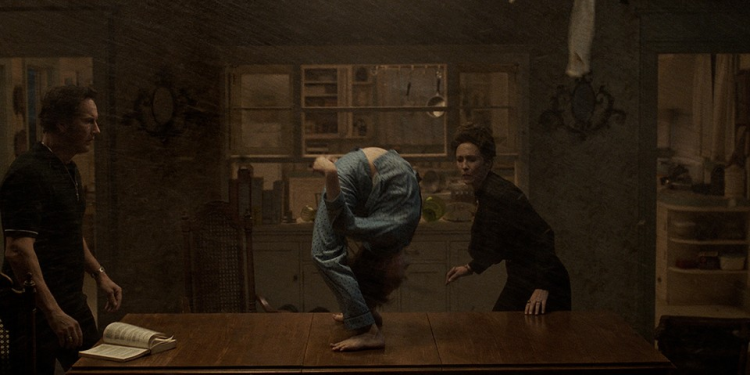 And, intriguingly, the stars that power this massive vehicle are the unassuming, pleasantly middle-aged Patrick Wilson and Vera Farmiga playing Ed and Lorraine Warren, the real-life ghost-hunters who permeated ’70s pop-culture, along with the Ancient Aliens, The Bermuda Triangle, Bigfoot and The Loch Ness Monster. OK, obviously the Warrens were never that big: You wouldn’t see them teaming up with the Six Million Dollar Man to fight the Ancient Aliens. They’re more in the category where you’d say, “The Warrens” today and people would squint their eyes and and say “Who?”, and you’d mention “Amityville”, and they’d say, “You mean, like in Jaws?” and you’d say, “No, no, as in Horror” and they’d say, “Ohhhh! Right.”

And some might even remember this particular case, where a young man stabbed another young man to death and claimed, as the newspapers had it, “The Devil made me do it!”. For those who are younger than nearly 29, the phrase “The Devil made me do it!” was made popular by Flip Wilson, who had a smash hit variety show in 1970, at a time when blacks were routinely stoned to death for appearing in public. Mr. Wilson himself was stoned every night after his show, if you believe the authorities, which you shouldn’t. Interesting to note that the phrase itself was a catch-phrase before the smash-hit horror The Exorcist. It’s possible that Mr. Blatty got the idea for his book from Mr. Wilson, and owes royalties to the man’s estates. We are not lawyers here.

But let us focus. 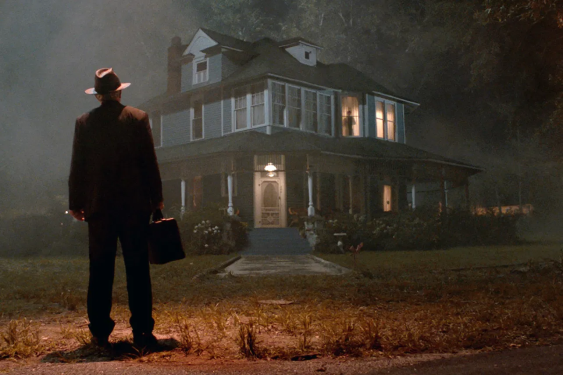 “The most original film I have ever seen.” — William Peter Blatty

I am somewhat “flip” about based-on-a-true-story stuff because I’m a student of the before-times, and I remember The Blair Witch Project, the many Exorcist and Amityville spin-offs, the antics of one William Castle, and of course Horace Walpole’s 1764 Castle of Otranto, which launched the gothic horror novel and was made of whole cloth despite Mr. Walpole’s assertion that the book was assembled with the 18th century version of found footage: A crazy old coot’s diary. But if it helps people get into the spirit of things, I’m not against some “enthusiastic” marketing.

The secret sauce of the three main Conjuring films, absent from the five largely inferior spin-off movies (three Annabelles, a Nun with a second Nun due out shortly, and The Curse of La Llorona), is that you care about what happens to Ed and Lorraine. The other movies at least keep the stakes as intimate, but ultimately these movies are love stories (and, like the Fast and Furious franchise, they’re all about family) and Lorraine, as the more sensitive of the two, deals directly with the forces of evil while Ed has an old-school chivalry drive to try to protect her.

In this installment, where they search for the source of the demonic possession that results in the murder of a really annoying, alcoholic but basically innocent, rocker, Ed has suffered a massive heart attack and is constantly forgetting to pack his life-saving serum. Another twist is that they have a corporeal enemy—recalling the latest (and last?) Insidious film—and, hell, let’s be honest, this one’s at least a 4th Level Magic-User. We got some serious witchery going on here. Spell’s-a-poppin’!

“She may be multi-classing as a druid.”

Anyway, you take your name actors (Wilson and Farmiga) and throw in some cheap character actors and then mix-in some young people to get the kids out to the show—actually, I think the most experienced of the young actors was ten-year-old Julian Hillard, who was in “Wandavision”, “Penny Dreadful” and the “Haunting of Hill House”, to say nothing of Color out of Space—and you can bring the picture in for under $40 million while raking in over $200M box-office world-wide, even as the world reels from its experiment with global fascism.

I, and everyone else in the theater, which is to say, again, I liked it well enough. There’s a certain transgressive quality to it which comes less from the horror (fairly traditional witches and boogens) and more from the Holy Warrior aspect which is inextricably Christian. I sometimes think I get the same perverse thrill out of hearing an “Our Father” in a movie-theater in the suburbs that raincoaters used to get from going to naughty films on 42nd street. Shock the squares, indeed.

I think, if you liked the other two, you’ll like this one. Is it as good as the others? I can’t really say. Honestly, three movies over eight years doesn’t leave me with too much of an impression beyond, “Oh, yeah, I liked that” and the little dribs-and-drabs that stuck with me. Director Michael Chaves, is certainly no James Wan (who’s too busy directing Aquaman 2 at this point, I’m sure), but this is better than his last Conjureverse flick, The Curse of La Llorona.

Wilson and Farmiga are better than ever, and that makes up for a lot. It’s kind of nice that they’re both about the same age and the same age as the Warrens were at the time of the story. (In a universe full of backstories, this one gives us the story of the Warrens’ first date, and it actually relates to the plot.) Not a bad movie to re-enter the theaters on, or just catch on HBO Max, I guess. 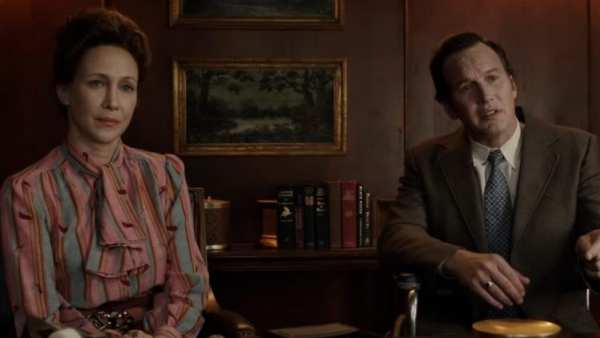 They may be wearing the Warrens’ actual clothes at this point.