Last time, NaturalFake brought up The Wind Rises and suggested a post on movies that present subjects from difficult POVs. For example, The Wind Rises is a charming historical fiction about an airplane designer whose only outlet—because he’s Japanese and it’s the ’30s—is building Zeros. The viewer must sympathize with a protagonist whose major early accomplishments involved killing a lot of American soldiers and helping drag the US into WWII. I started to build a list of other such movies—Birth of A Nation, Triumph of the Will, Paradise Now (or literally any Palestinian film since every single one of them is about how it’s a good thing to blow up Jews), and a few others which are even darker in subtler ways—and it was, frankly, a depressing exercise.

It feels like a bad time to be depressing. But if there’s a strong interest in the topic, I’ll cover it next time. 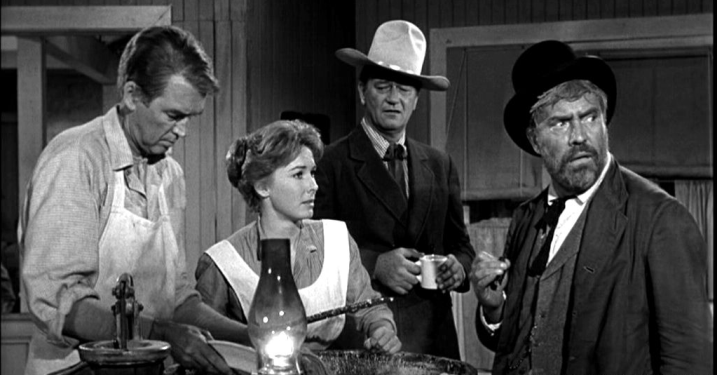 Liberty Valance: Stewart, Vera Miles, Wayne and Edmond O’Brien. Nobody knows how to block like this any more.

Instead, let’s talk about Westerns. And women. My #3 kid (“The Flower”) has been smitten with Jimmy Stewart since before we saw Mr. Smith Goes To Washington, so I showed her The Man Who Shot Liberty Valance. Well, now she was smitten with John Wayne, too. I suggested (the non-Western) Ball of Fire, where a bookish Cooper woos gun moll Barbara Stanwyck, and now she loves Gary Cooper (and understands Stanwyck’s appeal better versus the poodle wig Stanwyck of Double Indemnity).  Since we were unable to go out to see movies, she suggested I put together a series of Westerns we could watch.

I put together a list of a couple dozen classics: Stagecoach, The Searchers, Shane and so on. But a funny thing happened when we put on a random 1938 flick, The Cowboy and the Lady: I remembered that once upon a time, Hollywood made films like the Koreans make them now. Even a lot of “less than classic” Westerns are really good, they’re charming and entertaining and make you feel good. Not only that, the Western was such a comfortably American genre that hosted every other genre within them (romance, musicals, horror, etc.).

While “Western” as a genre tilts masculine, smart studios were always trying to woo women as well. Tales of gunslingin’ and cow-punchin’ draw in the men, so why not goose things a bit by throwing in some courtin’? In Cowboy and the Lady, Merle Oberon plays a post-college girl whose father has an ambition to be President, and who threatens said ambition by going out to a jazz club for a night on the town—when it is raided. Dad ships her off to their Palm Beach home where, desperate for any kind of entertainment, she convinces her maids to take her on a blind date with a bunch of cowboys in town for the rodeo. 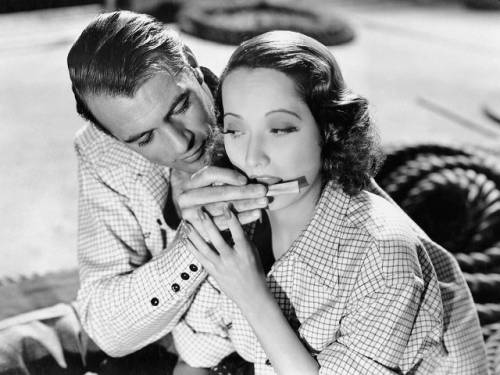 This picture of Merle Oberon makes my brain stop working.

Cooper has her at “hello”, but he’s so proper—and aggressively uninterested in loose women—she has to use every trick her maids have taught her just to get a kiss out of him. (Look, embrace the fantasy, okay?) That kiss is enough to convince him that she’s the wife he’s been looking for, which puts her in an awkward position. Things escalate rapidly and before you know it, the two wed just in time for Daddy to bring home the political power brokers he needs to get the nomination.

Is it silly? Of course. The breakneck pace of Cooper and Oberon’s romance is the sort of thing you might expect from a Lubitsch screwball comedy. Cooper delivers an unfortunately relevant lecture to a bunch of stuffed shirts condescending to him that reminds one that “the elite” have long scorned the rest of us. (Hollywood used to at least pretend to be on our side.) It wasn’t critically well-received (the NYT criticized its politics, as if that mattered), but it’s a crowd-pleasing feel-good time. Terrific supporting cast with faces you’ll know, like Walter Brennan and Patsy Kelly and music by Alfred and Lionel Newman (Randy’s uncles).

Another film that might appeal to the distaff set more than a traditional Western is Johnny Guitar. This actually is recognized as a classic Western, but the focus isn’t a lawman, but an unbeloved saloon owner played by Joan Crawford (looking pretty good for 50 but only few years from her Baby Jane turn). The mere presence of Crawford turns this into more soaper than oater, to say nothing of the catfights between Crawford and Mercedes Cambridge (probably best known to y’all as the voice of Pazuzu in The Exorcist), and probably enhanced by the fact that Crawford was a real-life terror, destroying Cambridge’s wardrobe in a fit of pique (and allegedly having her blackballed for years). Nicholas Ray claimed he threw up on the way in to the shoot every day. 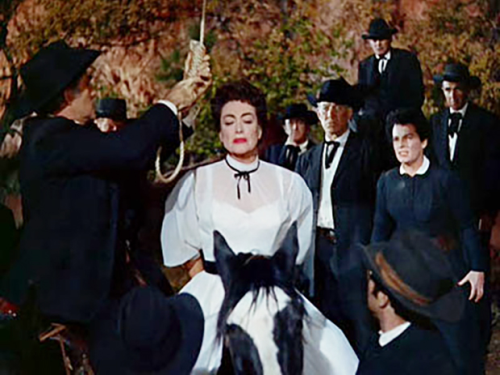 “You sure we don’t need a stunt double for the hanging scene?” “No, Joan, it’s perfectly sa—er, fine. It’s fine this way.”

Poorly received at the time, it may be Republic’s best Western—certainly up there with Rio Grande—and maybe even their best picture period, next to The Quiet Man. Supporting cast includes Ward Bond, Ernest Borgnine and John Carradine.

Another potential view for the fairer sex is The Furies, based on the novel by Niven Busch. Barbara Stanwyck plays a terror of a daughter to a terror of a man who lords over his cattle-land with an iron fist. Stanwyck rules over him, however, at least until he gets a girlfriend. Stanwyck, of course, was a powerhouse in the world of the Western. I’m not a TV guy but if IMDB can be believed, some of her best work was on “The Big Valley”, “Wagon Train” and “Rawhide”.

When the musical romantic comedy invades the western, it’s hard for me to view it as much of a western, as “musical” overwhelms all. If someone made an opera out of The Good, The Bad and The Ugly (not as improbable as it sounds, considering the existence of Hercules vs. Vampires), your takeaway would be “opera” not “Western”, I think. That said, Calamity Jane is a fun, frothy time with a western dressing. Like many of the musicals of the day (and many of Day’s musicals), it’s fairly forgettable.

But the thing is, it won’t make you feel bad. And maybe that’s the key: Virtually nobody in Hollywood at the time thought they had a mission to make the audience feel bad. Even the occasional downer (The Ox-Bow Incident) proceeded with the notion the audience would root for justice. The point was never to blame or degrade. And that’s why a lot of even “middling” Westerns are still worth watching decades later. 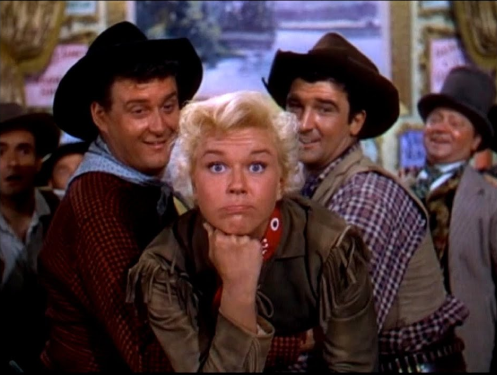 Doris Day movies are crimes against history. But what are you trying to get history from a movie for?

2 thoughts on “Westerns For The Fillies”