The Koreans had let us down. Our Christmas tradition (starting in 2016 with The Handmaiden) hit a roadbump when The Boy and jetted down to Koreatown on Christmas Eve Day (about the only time you can jet down to Koreatown from The Valley) only to discover that the only Korean movie playing, Ashfall, did not yet have English subtitles. I mean, the website said there weren’t subtitles but I just couldn’t believe it. The trailer had subtitles. Why would you give the trailer subtitles if the movie didn’t have them? 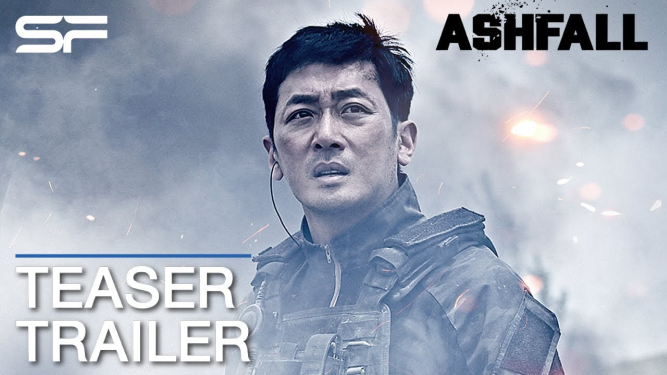 They’re not kidding about the “Teaser” part.

Well, that’s the “yet” part. This Korean volcano drama (I mean, come on!) will eventually have subtitles, but that was no help to us. We wandered around the city, considering our options. 63 and Up was on our list but it’s 3 hours, which is more than we wanted to spend just then. There’s a movie about fungi, which—who doesn’t love fungi?—we thought about but it was both at an awkward time and we felt likely to be overburdened with envirotragiporn. Potentially interesting films, like 1917 or even Black Christmas, didn’t open until the evening.

So we gave up.

On the way back home I said we should stop by and pick up a movie card for The Boy’s grandfather, and we stood there looking at our options: Cats and The Two Popes. The former had some potential as a cringe-watch but I remembered The Boy’s grandfather saying he had enjoyed The Two Popes. Well, we left. Then when we were in the parking lot, The Boy said, “Dammit, I wanna see a movie.”

This has been a particular bone of contention this year, in which we’ve seen barely 100 films. We used to gamble all the time, The Boy points out, and it’s true—but my point is that, it’s not that we’re not gambling, it’s that Hollywood (and the affiliated indies) are being very, very predictable.

We decided to risk it, pausing almost to abort a third time when I noticed the poster. Oh, it’s a Netflix movie. That set off red flags for The Boy. Then I noticed it was by Fernando Meirelles who direct one of the best movies I’ve seen in two decades (City of God) and one of the worst movies I’ve ever seen (The Constant Gardener), and I have come to believe that the good movie was a fluke or the result of his co-director, Katia Lund. But we committed ourselves and in we went.

The annual Benedictine vs. Franciscan football game is big at the Vatican.

Should have skipped it.

This movie feels like Catholic cosplay—a bunch of atheists sitting around making a nonsense story (in a silly, pseudo-documentary style) without any concept of what they’re doing. It literally seems like someone said, “Hey, the new Pope’s a progressive Marxist who agrees with all of our politics, let’s make a movie about him!” If anyone said, “Hey, should we study Christianity and the issues facing the Church beyond the headlines,” the answer was most assuredly “Nahhhhh”, or so it certainly felt.

This movie has it that Cardinal Ratzinger represents the old Church, with all its flaws and concerns for human dignity and general freedom, while the hip, happening Cardinal Bergoglio, who seems more devoted to “economic justice” (Marxism) than any spiritual concerns, is the New Church and its chance for success. Because if there’s anything that troubles leftist atheists, it’s that the Church might fail going forward.

The whole movie’s arc is Anthony Hopkins (as Ratzinger) coming to realize that his successor is better able to lead the Church than he is, and Jonathan Pryce (as Bergoglio) coming to grips with failing to be sufficiently revolutionary when the communists were trying to subvert the government of Buenos Aires. Although Hopkins is well past his prime, he’s pretty good here, and Pryce is great as always, so the movie has that to commend it.

The message is delivered in the same ham-handed childish fashion as the deplorable Constant Gardener. Nothing really makes sense the way it’s portrayed.

On a technical level, the movie suffers greatly from the shaky-cam pseudo-documentary style and a jarring use of music, as when entering the Sistene Chapel the first time, what do we get? A saxophone solo. There’s a cute moment where one of the cardinals (maybe Bergoglio, I don’t remember) is whistling “Dancing Queen” which Ratzinger asks after, not being very familiar with pop music. But that’s followed up by the cardinals filing into the chapel to the actual strains of “Dancing Queen”. Why? What’s the point of that?

What’s the point of anything beyond “Yay! Progressivism!” here? I have no idea. But this is the first time in recent memory I can recall The Boy and I literally regretting having seen a movie. 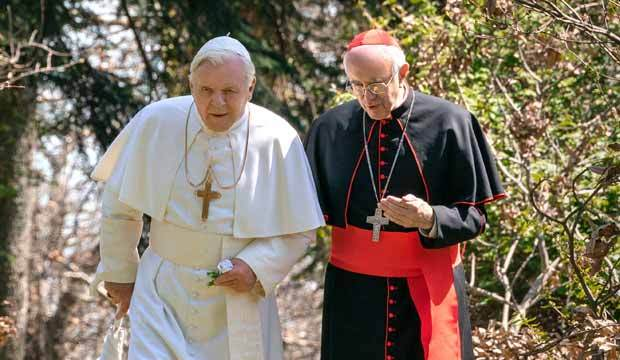 These guys can act but that’s about all there is going on here.