OK, I know I just covered Joe Bob’s Last Drive-In Show which isn’t even a movie, but when it turned out Joe Bob Briggs (government name John Bloom) was coming to Los Angle-eez for his presentation on “How Rednecks Saved Hollywood”, I had to go see it—and if you have any love for movies, for low-budget movies, for rednecks, even, this is a great way to spend a couple hours. 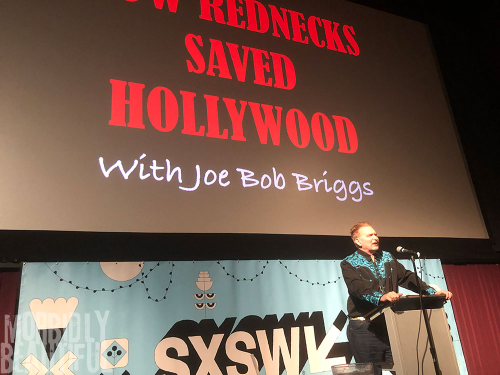 For his L.A. performance, he was wearing a white sequinned jacket Elvis would not have rejected.

I was surprised as hell, actually, that this show ran this long. But he got a standing ovation on his way in, and he got one on his way out—enough for him to do an interesting kind of encore—so I hope he comes back soon. He mentioned that he was reluctant to come out to Ellay—”they won’t get me there!”—but the old Egyptian theater was packed solid.

Somebody had given him a bottle of bourbon which launched a great rant. “You’ve got six of these local ‘artisinal’ bourbons…and I’m sure you’re all very proud of them…” Wherein we learned a little about Wild Turkey and how good bourbon aging has to do with being close to the source of the water—and obvious conundrum for L.A. Also, he expressed skepticism that a couple of kids studying bourbon on the Internet could compete with the guy in charge of the aging barrels at Wild Turkey, e.g., who had been supervising them for 65 years.

What was this talk about? How did Rednecks save Hollywood?  Well, it seems that back in the 16th century, in the lowlands of Scotland, John Knox founded the Presbyterian Church of Scotland and… 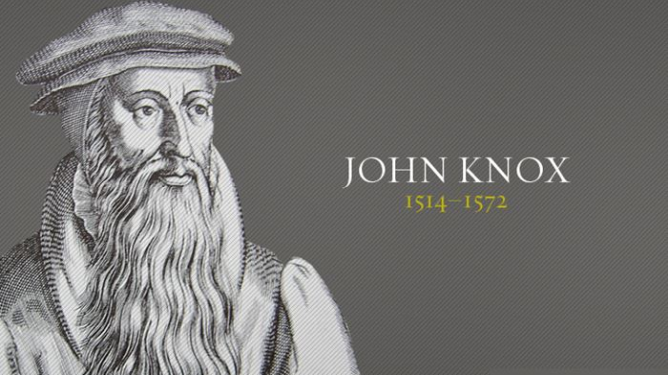 What? Did you think this was going to be some lightweight romp through “The Beverly Hillbillies” and “Next of Kin”? Oh, no. To understand how rednecks saved Hollywood, you have to understand what a redneck is. And it begins with the pugnacious lowland Scots, and the hard-drinkin’, god-fearin’, establishment-fightin’ John Knox. How the Scots were relocated to Ulster county Ireland (giving us the “Scots-Irish”), and from there emigrated to America where they fled as far from the reach of establishment as they could (without running into Injun Territory). And that was the hills.

We learned the origin of the word “redneck” (coined by a travelogue-writing Revolutionary War widow trying to make ends meet while fighting for her husband’s war pension), “hill billy” (which doesn’t show up till nearly 1900!) and the main principles of redneck movie making which include illegal moonshine (or just “whisky”, if you’re a redneck), sexually aggressive women, and a rebellious attitude toward government. (The Whisky Rebellion, in fact, features prominently.)

Joe Bob covers the early days of redneck film-making, and the 25-year love affair the American public (but never critics) had with hillbillies, starting with the Li’l Abner comic strip and ending with a trio of box office poison pills, the most famous of which is Hillbillys In A Haunted House. These sorts of films were more “Redneck Lite”, and he showed the great musical number from Li’l Abner where the town is singing about the great Southern general that was an incompetent, drunk coward. The point being, I think, that the modern idea that these are all paeans to white supremacists grossly misrepresents (and needlessly polarizes) the issue. 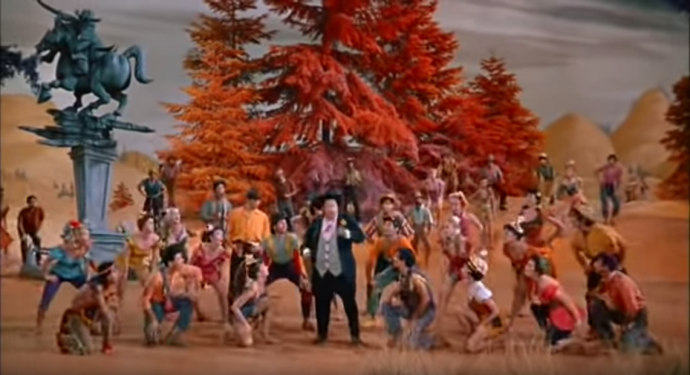 Who wouldn’t be proud of Jubilation T Cornpone?

Then we got an overview of ’70s “hicksploitation”, and the movies that introduced the world to The South as a hive of scum and villainy, Deliverance and Texas Chainsaw Massacre. This all builds to the two main premises: First, Hollywood needs a “go-to” villain class, which was (in progression) blacks, Nazis, commies, Arabs—but then in after 9/11 it became racist to suggest an Arab was a terrorist, so the go-to became rednecks. He shows “the slap heard around the world” from In The Heat Of The Night and points out that Endicott (the guy Sidney Poitier slaps, played by Larry Gates) is not a redneck. Rednecks didn’t own slaves. They wouldn’t know what to do with them. It’d be like always having a stranger on your property. (Rednecks not liking strangers is another important theme going back to John Knox.) Areas high in rednecks were slow to join the Civil War because…redneck! So there was a little Hollywood jiu-jitsu as rednecks are surreptitiously inserted into where the landed English slave-owning patriarchy rightfully was.

Second, that Smokey and the Bandit is the greatest movie ever made.

Now, I’m not a huge fan of that movie. I enjoyed it on my second (recent) viewing more than I did at the time. But in context of this talk, you have a rebellious, booze-running hellraiser and a woman of questionable background (not that Sally Fields exactly pulls that off) running from the law…and the face of John Knox emerges once again. It’s not often you see a cinematic tradition so compellingly traced from 16th century religious movements.

Rednecks don’t get respect in Hollywood. Burt Reynolds was the #1 box office draw for more consecutive years than anyone in history, I believe. Joe Bob also points out the “Ma & Pa Kettle” and Ernest P. Worrell series, about a dozen of each made, that nobody ever admitted going to see and nobody ever gave any awards to, and how something similar goes on today with all the hillbilly and rednecked themed “reality” shows.

I knew a great deal of this material. As Joe Bob was going along, leading up to particular movies or actors, I would say the title under my breath, “Haunted Hillbillies”, “Claudia Jennings”, “Li’l Abner”, “Ma and Pa Kettle”, “Patrick Swayze”—he had a redneck period, which Briggs maintains limits your career in Hollywood–to the point where my companion said, as we were leaving the theater: “You didn’t learn that much from that, did you?” 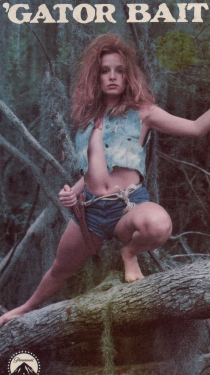 Half Animal! All Woman! (It was a big seller when I worked at Paramount.)

It’s true that I knew a great many of the movies.  (I had thought up until right them that “Scots-Irish” meant “Scottish and/or Irish, who can tell the difference?” embarrasingly enough.) And there were more than a few titles I did not know or had long forgotten. For example, did you know that Ginger Rogers and Doris Day were in a movie about the Klan? That was a new one on me. Ronald Reagan was the star of it! (I’m surprised we don’t see stills of it today to show that he supported the KKK.)

Another one I vaguely remembered was a big budget ’70s flick called The Klansman with Lee Marvin, Richard Burton, Lola Falana, Linda Evans, the Big Lebwoski himself, David Huddleston…and O.J. Simpson. Who, fleeing the police, carjacks a Ford Bronco. A white Ford Bronco.

There are a lot of twists and turns here, really, a lot of fun, and basically for those of us who have watched JBB’s various hosting gigs over the years not for the movies (which we’ve seen a thousand times) but for his bits in the commercial breaks, it is a genuine treasure. Those of you not in deeply blue areas probably have a good shot at seeing him, and I can’t recommend it enough. But I imagine there will also be a video release, much like his Joe Bob Dead In Concert from the ’80s. Though, honestly, I think he’s just gotten better over time.

After his standing ovation at the closing, he came back and did a bit that the Shudder movie channel had objected to, that he had set up as a commentary for Sleepaway Camp, which is (as he said) “about sexual confusion”. And it was about the recent North Carolina law regarding transgender use of the bathrooms. That in itself was fascinating, because it expressed a viewpoint that was neither conservative nor liberal, in the modern uses of both words, but was more about being a decent human and not ramping up everything. As he put it, redneck men have two modes: Sheriff Andy mode and Barney Fife mode, and we just needed a lot more of the former and a lot less of the latter.

And I got the impression that—as a guy who makes a living saying things that are “controversial”—it sort of hurts his feelings when he does get censored in what is basically a plea for humane treatment. Interesting that a redneck would be the voice of calm and reason but here we are. 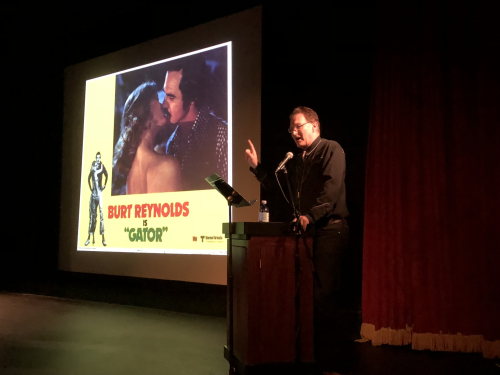 Moviegique says “check it out”!