Any mention of this tragic 1994 Brandon Lee movie results in me going into my South-Park-Satan routine, “You guys…nobody dress up as The Crow…” because really all I’ve ever known about this movie is that its lead character became the default douchebag Halloween costume of the ’90s. That and the director Alex Proyas would go on to direct Dark City which didn’t give me seizures, but made me wish I were susceptible to them. 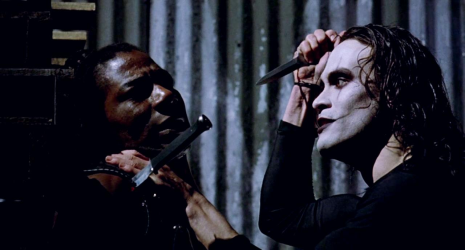 “Do the stupid South Park voice. Do it!”

I tamped down expectations but told The Flower whatever else about it, she might enjoy the visual style. This was not enough to induce her to come out as she was approaching her 18th birthday and, as she assures me is true of all young girls coming of age, she wants to be sure she’s ready to become a responsible member of society. So she goes to bed early and makes sure she studies her Bible diligently.

This is an odd, odd movie. It’s based on a comic book back when that wasn’t very common, and I feel like I need to go read the comic book to see if the weirdness is in there or if it was just that kind of strange undead-superhero-buddy-cop mashup from the go. 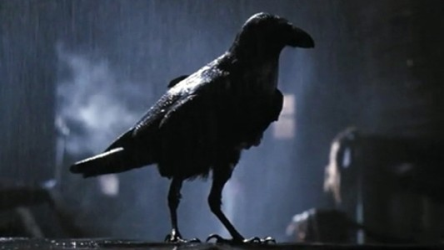 Not an actual crow, but a raven. I guess.

The movie begins with the crime scene where Eric Draven and his girlfriend have been assaulted and murdered, but in the case of Draven it doesn’t take, and he wanders the city seeking revenge on his killers. On the one hand, I salute the in media res approach because why do we need to see another origin story (even in 1994 it was old hat) and also I hate the rape-murder scenes that fuel this kind of movie.

On the other hand, it’s curiously distancing. We don’t really know Eric or Shelly—and we barely get to know the former while not learning anything at all about the latter—so we end up with a basic supernatural revenant story where the hero chooses (for some unknown reason) to wear mime makeup. Ernie Hudson grounds the movie (as he often does) as a too-honest-for-the-city busted-down-to-seargent beat cop, but there’s not a lot of time for him.

Basically, then, we’re witness to a series of murders which are vengeance for those other murders. The bad guys are a mixed bag, as far as their own characters go. Like, I remember Jon Polito, because he’s Jon Polito doing his Jon Polito thing. (Think more The Big Lebowski and less Miller’s Crossing.) So too with David Patrick Kelly (most famous for being Luther in The Warriors). Bai Ling is creepy good but probably with more emphasis on the creepy, and Michael Wincott as the Big Boss is kind of generic. In fact, I went the whole movie thinking to myself, “Hey, is that James Remar? I think it is! Do I like James Remar? I never know until the show is over.”

This usually only happens in movies that James Remar is actually in. 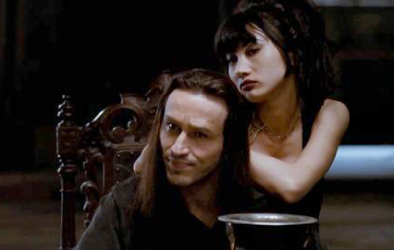 Pictured: Not James Remar with Not Michelle Yeoh

Another thing about this movie is its fakeness. The thing about all the aforementioned characters and especially Rochelle Davis (as Sarah, the young teen who was friends with the Dravens and becomes a friend to Eric in his afterlife) is that they all feel like props. It’s not the actors, really. And, more to the point, it’s not all bad. Proyas is going for stylized archetypes and it works surprisingly well in some places and less surprisingly not so well in others.

Like, the city itself is a mashup of miniatures, composition and CGI that looks completely artificial but not in a bad way. It communicates the surroundings well and you get more of a sense of space in this movie than you do in the modern CGI slugfests. But as the proceedings wear on the 2-dimensionality of everything gets increasingly evident. Like, the city seems to have no purpose or function. There are bad guys running the show, apparently, but there’s no indication that there is anything like normal human activity going on, with on exception: After we learn that the night before Halloween is like a mini-purge with criminals running amok, and that this is the night the Dravens were killed, and after seeing nothing but seedy, criminal and violent activities, a waning Draven is startled by images of monsters—only to realize they’re just happy-go-lucky kids on their way to a Halloween party. 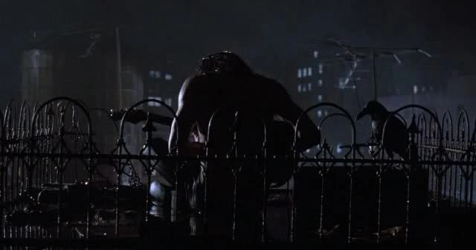 In a tiny metal pan in front of a too-close matte.

How does that happen? I mean, if we presume that there is, e.g., a good part of town where the privileged people live, that’s all well and good—but this all happens in the same dump with the dive bars and drug violence and so on.

It’s fine to be stylized. Even highly so. You could argue that this is the sort of trope that comic books work on, especially the darker, grittier comics of the late ’80s/early ’90s, like The Dark Knight Returns. But it jangles here.

Also, people are a little more dense than seems right. Like, a room full of baddies has an obscured, open field to fire all their weapons at Draven, and doing so fails to kill him. So then they spend the next few minutes trying to shoot him even more as he kills them. I dunno. Just seems dumb.

It’s not bad and some of the places where it gets things right are very cool. The Boy and I were glad we saw it, even, but I was pretty sure The Flower had made the right choice for her.