Of all the disaster movies, The Poseidon Adventure is one of them.

It’s probably my favorite. I never saw a need to re-watch Earthquake or The Towering Inferno, but The Poseidon Adventure seemed to get funnier every time I saw it! No, not funnier, just more fun. And despite the fact that at least one person in the theater had brought a party hat and noisemaker to blow during the New Years’ Eve scene, this is not really a campy movie, for all its broadness. It’s just meant to be fun.

Like Earthquake, you’re supposed to be able to grasp the situation quickly and know how to feel about it. You get that the blowzy cop (Oscar Winner Ernest Borgnine) and his ex-whore wife (Golden Globe winner Stella Stevens) love each other, beyond all the squabbling. That the old Jewish couple on their way to Jerusalem (Oscar Winner Jack Albertson and two-time Oscar Winner Shelly Winters) are good-hearted souls. That bro and sis (Eric Shea and Pamela Sue Martin) are gonna fight, but bro’s boyish enthusiasm for ship schematics will save the day. Soulful bachelor (Oscar Winner Red Buttons) is going to shepherd grieving lounge singer (lost-her-Golden-Globe-to-Stella-Stevens Carol Linley) through it all, and they’ll get married and lived happily ever after—if they survive! And you know that the Radical Preacher (two-time Oscar Winner Gene Hackman) is really gonna turn things around in whatever backward African country he’s going to.

I’m not sure this match is believable.

Broad, yes. But not careless. And not unlikable.

Well, you know: Big title (typoe that I’m leaving in for its awful punny-ness) wave hits the ship (despite National Treasure Captain Leslie Nielsen’s best efforts), turning it over, and a handful of survivors led by the Preacher get it in their fool heads to head up to the engine room, which would be sticking out of water and is also where the hull is thinnest. For myself, I’d think that heading upward and away from water would be a no-brainer on a sinking boat, but we can only have so many people in our little melodrama, so with the help of a plucky waiter (shockingly Oscar free Roddy McDowall) our Ten Little Indians head off on their adventure.

Which is, The Boy and I thought, part and parcel of why we liked this movie so well. It’s a movie where a lot of people die, but you are supposed to have fun watching it. You’re supposed to be sad when someone dies but, you know, movie sad. You aren’t supposed to come out of it feeling like you wanna kill yourself.

This was actually a pilot for “The Love Boat”. Not a lot of people know that.

Is that even a thing any more? You’d think, for example, superhero movies would be that way but, really, they don’t show death much and when they do, it’s very, very serious (because it’s one of the heroes, or someone the heroes have a longstanding relationship with). I saw the movie remake (there was also a TV remake)…I think. I sorta saw it? It was on TV and I put it on and lost interest immediately, it was so bland and cold and grim.

In the 1972 movie there are precisely two children on board, Shea and Martin. (And Martin’s 19, but clearly supposed to be 16-ish.) And both survive with very little harm (changed from the book, I believe) except for Martin’s latent crush on Hackman—which is way subtler than I remember it. The extras all die to their own stupidity, while most of the main cast that dies does so in more-or-less heroic struggle.

I don’t know. It’s hard for me to conceive of this film as “having a light touch” but compared to today? Can you imagine any survival/disaster film today being called an “adventure”? 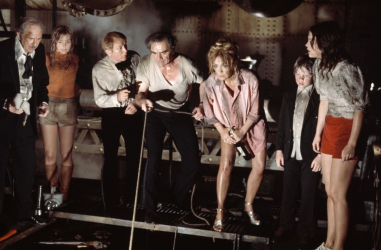 It’s an adventure in legs is what it is.

I was impressed by Shelley Winters performance here. (She put on 35 pounds for the part and could never quite lose it afterwards.) There’s something sane about it: She’s fat. She knows she’s fat. She knows it’s a liability. Stella Stevens calls her out on it, rather rudely. It’s like people could talk about the elephant in the room (as it were). And yet, she’s not a clown, she saves the day. (This is an interesting switch from the script, which called on the Preacher to let Winters’ character risk her life for everyone else, which Hackman said—correctly—didn’t fit with his character.)

I was impressed by Ernest Borgnine’s biceps. That guy wasn’t just fat, as my generation knew him. He had some muscles.

John Williams’ score is, much like Earthquake, solid. Of the time but not embarrassingly so. Some very nice moments throughout.

The conceit that all the (not fat) ladies have to take off their gowns seems less prurient to me now than a few years ago. Even Stella Stevens’ underwear seems almost modest.

I’ve often felt the story could be analyzed as a religious allegory. The Boy noticed this, too. The people who insist on staying behind, then panic when the ship starts to flood. The doomed adventurers going the wrong way down the ship who refuse to join up with the survivors. The lighting seems sort of otherwordly and underworldly, as our heroes try to rise up to salvation.

It probably wouldn’t hold up too much under scrutiny. It’s just a fun movie.

There’s got to be a morning after.