Dark night…it’s a daaaaark night! Say what you will about the oeuvre of Robert Rodriguez and Quentin Tarantino—and I got a lot to say about (and probably to) both of them, the use of The Blaster’s “Dark Night” in opening of From Dusk Till Dawn is absolutely pitch-perfect. And the movie itself pulls off one of the only successful mid-movie genre switches in American cinema I can think of. (Asians do it as casually as Americans do training/dress-up montages. I have yet to fully grasp this.) 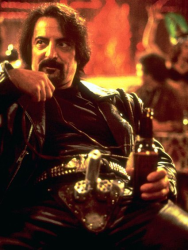 This…makes no sense. But is so perfect.

When I saw this back in ’96, I enjoyed it, but as is often the case with Rodriguez films, I felt that there was a lot of stupidity going on. A lot of things don’t make sense, not just from a plot standpoint, but from a physical universe standpoint. The speeds at which things move does not jibe with the length of time it takes for distances to be crossed. This is typically a verisimilitude breaker for me. And there’s no doubt that the big barroom vampire brawl makes no sense in any known physical realm. But I let it slide 20 years ago, because it was fun.

Now? Well, it mattered even less. It was even more fun. I’m not sure how that’s possible, except that along with skipping more important (to me) aspects of horror movies—like establishing a clear sense of rules so I can understand the peril to the characters—Rodriguez and Tarantino skip all the tedious parts. There’s no reason for any of this. At the end of the film, when George Clooney interrogates Cheech Marin (in his third role of the film) why he picked this bar, he says, “No reason. One place is as good as the next.” The only thing that could pass for exposition is that last shot, panning away from the bar, revealing it to be on a cliffside and the very top of an ancient Aztec pyramid. 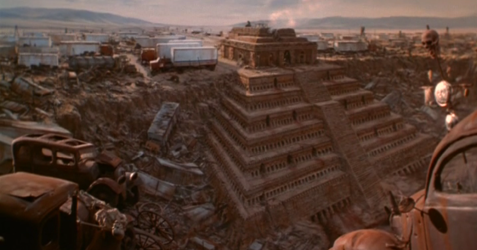 How ya doin’, Matte?

Nice. And that’s the kind of movie this is. It’s sheer EC comic book “Tales from the Crypt” stuff. As such, the imagery is meant to be cool, not logical. And there is a ton of cool imagery.

Don’t expect any depth. George Clooney’s a bad man whose only redeeming qualities are loyalty to his brother and not being a pedophile. His brother is a sexual psychopath, played by Quentin Tarantino. Tarantino wrote the part for himself, presumably, and it includes a scene where he drinks booze off of Salma Hayek’s foot. (Tarantino is somewhere in between Woody Allen and Edward D. Wood, Jr., as far as putting his neuroses on screen.)

Meanwhile, fun fact: Most of these old movies, when they’re put into high-def, you discover all the flaws and shortcuts that were not available in “standard” definition. Seams in set walls, or marks, or just fakeness really pops in high def. And the actors tend to look a lot more ragged as well, too, having been made up for a lower resolution. FD2D gives us our only exception to date. 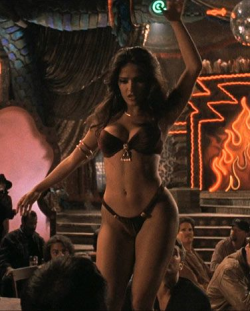 Can we get this scene in 4K?

Salma Hayek actually looks hotter in high-def, The Flower and I agreed.

Yowza. Anyway, the movie is powered with great performances from B-movie stalwarts like (makeup impresario) Tom Savini (last seen by us in Knightriders), Fred Williamson, and the generally-respected-but-no-stranger-to-B-movies, Harvey Keitel. Keitel’s part is one of those glorious clichés—he’s a fallen priest—that makes no sense, and actually has very little to do with the action as it unfolds, but given the existential nature of the crisis (vampires in Western culture are traditionally set against the Christian tradition, after all) it’s as wonderfully lurid as The Blasters’ electric guitar riff on “daaaaaark night”.

It reminds me a bit of Gene Hackman in The Poseidon Adventure, where Hackman’s not just fallen but downright angry at God, to the point where he is yelling at him while sacrificing his own life saving the others. (They’re playing The Poseidon Adventure in December, so I’m excited about taking the kids to see that gloriously bloated B-movie melodrama.)

I guess the point is that it’s a stylish comic book movie with no superheroes and no real pretensions except a desire to be cool and fun that succeeds on exactly that level. That ain’t bad. Our modern superhero flicks could use a lot more of that attitude, to be honest.

We all loved it. 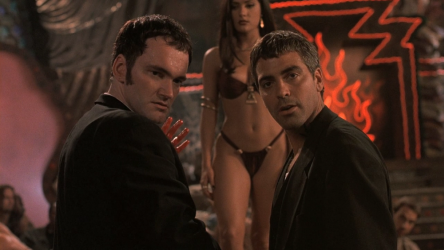 Clooney. Clooney! Down in front, man!