The Flower puts a certain amount of weight on my cinematic opinions in gauging whether or not to go to a movie. Also, sometimes she gets really, really busy, so it doesn’t take much to hold her back. And the interesting thing to me about Tim Burton’s Batman movie is that my reaction to it today is exactly the same as it was 30 years ago, minus the hopefulness. That is to say, it’s not a very good movie, but it’s a movie with some very good elements. Back then, I hoped it would auger in even better Batman stories, and then we got the execrable Batman Returns where Burton just hammers down the point that not only does he not get The Batman, he doesn’t understand heroism. 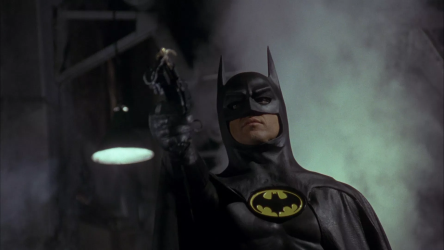 Makes for great stills, tho’.

But at this point, you had a movie that took itself seriously enough to not look cheap, and to invest heavily enough in the visuals to really evoke a “Gotham city”. Basically, Burton nailed the atmosphere, found an improbably compelling Joker in Jack Nicholson, evoked an even more improbable Batman—but not much of a Bruce Wayne—out of Michael Keaton, and the rest is pretty much carried through by Hollywood’s competent technicians.

What works is Nicholson channeling Caesar Romero, Keaton in the outfit, Basinger being suitably beautiful, Robert Wuhl being dogged and a little grimy, Michael Gough’s Alfred being distinguished and concerned, Jerry Hall being hapless, and all the beautiful toys and sets. The plot and dialogue are serviceable. Danny Elfman’s score is iconic. The art direction choice to make it a sort-of-80s-sort-of-40s style both fixes it in time and still works exceedingly well. The stuntwork makes the otherwise ultra-stiff fight scenes come alive way better than they should. You can see why this would launch the (generally regarded as superior) animated series. 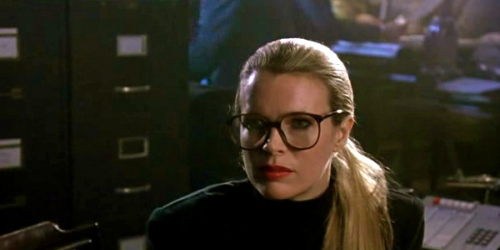 Brainy Basinger (you know, ’cause of the glasses)

Some things have aged poorly: The Prince music feels like a stupid pop-trendy tie in, which it was; the rest of the cast smacks too strongly of hedging between the campy TV show and something more serious (the late great Pat Hingle’s Commissioner Gordon looks and sounds like a cartoon); Batman’s hyper-preparedness (a long-running gag predating even the TV show) really jumped out at The Boy, particularly when the Bat-Plane has built in jaws that could serve no other purpose than thwarting the Joker’s balloon-based plan; and the slowness of the action constrained by wire work. The sudden appearance of goons at the top of Gotham Church so that Batman will have someone to fight (when the movie makes pretty clear that Joker’s retreat to that Church was clearly impromptu) bugged me this time. The Boy said that was his planned retreat but there was no reason for him to ever retreat if his plan to kill everyone went off, right? Were they just waiting up there as a contingency? Does the Joker (who shoots one minion capriciously five feet away from another) seem like he’s up to that sort of long-range planning?

To name a few issues I didn’t mind as much back then. 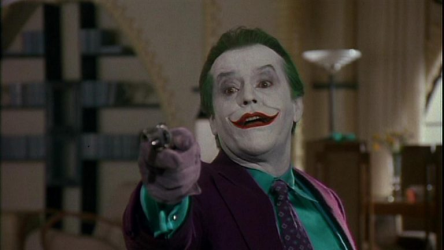 One of the least Joker-y faces imaginable, but he pulls it off.

Some things were bad then and are still bad now: Sam Hamm’s script, while it has its moments, tries too hard to make the Batman/Joker connection with the improbable and Gremlins-level-stupid “dance with the devil in the pale moonlight” line. This drove me nuts in 1989, but I would give credit to Hamm (or whoever) for not starting with Batman’s origin story. Then there’s Burton’s clear failure to grasp Batman on so many levels: His unwillingness to kill, for example, is somewhat diminished by his dropping a bomb in a factory and strafing the streets of Gotham in the Bat-Plane.

The idea that Batman is a complete loner doesn’t bear scrutiny, either. Sorry, kids, but no. Batman is not a Dexter in a cowl. He’s not a sociopath aimed in the right direction. He has friends, support crew, and always have, even if we don’t dwell on Ace The Bat-Dog or Bat-Mite, or any of the goofy stuff that evolved in the comics. 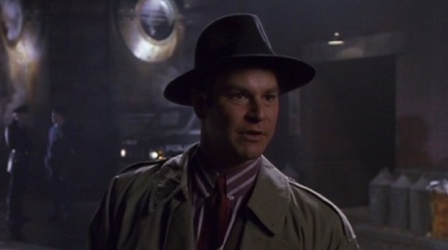 The rubber suit is just a disaster. I don’t knock the movie too much for it because how else you gonna get the look you want in ’89? But the poor man can’t even turn his head. Kudos to Burton for managing to play it off, sorta. And I guess you couldn’t really use tights, after the ’60s Batman. But, man, it’s…constraining.

The Boy’s Girl liked it, and has seen it many times before. (Her family watches videos, which we haven’t done here since The Flower was a baby.) But The Boy and I were pretty much on the same page. 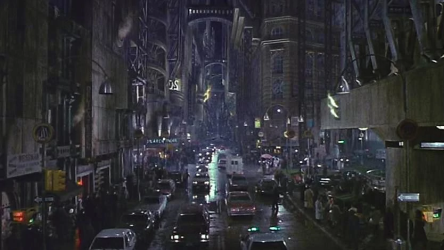 This may have been the last great matte in movie history.