Here’s a movie with a simple, not very informative title (Stand By Me) and production values comparable to a TV movie, along with a sort of Hallmark-y kind of plot: Grandpa is raising his two grandchildren, very unsuccessfully, after his son died and he threw his daughter-in-law out of the house. You gotta wonder, as a discerning moviegoer, if this is going to be worth your $15. (Yeah, movies in K-town ain’t cheap, and if you go see two the same day, as The Boy and I do, you can only get Moviepass to comp one.)

The title thing is interesting because a lot of times the generic-sounding titles aren’t really generic at all, they just translate poorly. Be With You was like that. In this case, however, grandson’s name is Deok-gu, and that is the name of the movie, and the distributors probably figure that anything is better than an actual Korean sounding phrase. They may be right in that, although I don’t see a lot of evidence that any of these movies get much play here in the states.

All that aside, the Koreans have such a fascinating cinematic relationship with their elders. Like Americans, in that the younger generations act radically different, but also unlike them in that there’s a lot more respect for a lot more radical behavior shown.  This movie is a good case in point.

Grandpa works his butt off scraping grills (Korean barbecue!) to get money to raise his grandchildren, but he really has no clue what he’s doing or how the world has changed. He’s very poor, rural, and he’s very hard on the boy, making him yell out his ancestral family, and even engaging in corporal punishment. All because he threw out his daughter-in-law after his son’s death. Turns out she had absconded with the insurance money, and it was just too much for the distraught father. But as hard as the grandson has it, the granddaughter is positively reverting to an infant state. (I’m not sure of the science of this but at one point, the doctor just says “She needs her mother! This is what happens when kids don’t have their mothers!”) 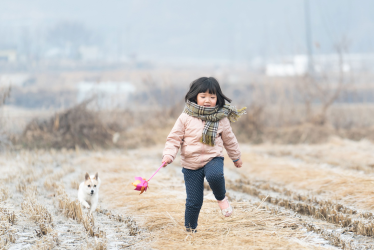 That’s no excuse not to take beautiful pictures, however.

The plot twist here, which is slowly revealed—at least to us, it may have been immediately obvious to the Koreans—is that the daughter-in-law is Indonesian. So this is a kind of issue by itself on the one hand—just like an Indonesian woman to run off with your son’s insurance money, I guess—while on the other hand, they can’t actually understand each other very well, leading to the issues that resulted in the old man evicting her from the family home.

The other thing set up almost immediately is that grandfather is dying. So he has to find the kids a home. He’s not crazy about foster homes but virtually everyone in Korea has more money than he does, so there’s that. Meanwhile, for all their friction, the grandkids don’t want to leave him.

The second act kicker is when he discovers that his daughter-in-law took the insurance money to pay for a close relative’s surgery (a niece?) that saved the child’s life. Our protagonist actually goes to Indonesia to discover this. (He tries to make the fare by convincing whatever powers-that-be in Korea that they should give him the insurance money for his impending death in advance, in a darkly amusing scene.) Turns out mom was in the big city in Korea all along, trying to scrape together enough money to pay grandfather back.

The Big City is Big. And Rainy.

It all comes a-cropper when the grandfather decides to send the kids to the foster home rather than force them to watch him die.

Meanwhile, Indonesian mom, having heard of a crazy Korean boy yelling in the street for his mother—and repeating the litany of family history his grandfather beat into him—is racing back to try to convince grandfather to take her back and reunite the family.

Since this is a Korean movie, they’re gonna rip out your heart several times over, even as you know that things are going to have to be all right, more or less. Aren’t they?

It’s a messy, complicated film, really, and kind of beautiful in the way it shows how we all struggle to deal with what life throws at us, and at the same time create so many of those struggles ourselves. We both ended up liking it more and more as it went on, and our unbroken streak of successful Asian film viewing continued…