The “middle period” of Wes Anderson’s career, which I sort of regard as starting after The Royal Tenenbaums contains my least favorite of his films: The Life Aquatic With Steve Zissou, The Darjeeling Limited, and Fantastic Mr. Fox. His first three films (Bottle Rocket, Rushmore and Tenenbaums) were co-written with Owen Wilson, who I assume brought that whimsical sensitivity he shows in all his performances. Aquatic and Fox were both written by Noah Baumbach (The Squid and the Whale, Frances Ha), who I assume amped up the father-son-dysfunction dynamic that seems to dominate his movies. 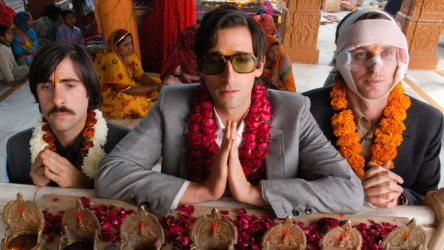 Enlightenment is on the schedule for 3:45.

This was the first Anderson film I took The Boy to, and we were conservative toward seeing it again. But so far, we were three-for-three, with me enjoying the films more now than when I’d originally seen them.

And so it was here.

The movie begins with a moody short featuring Jack (Jason Schwartzman) meeting with his on-again/off-again lover (Natalie Portman) in the Paris hotel where he’s been staying for the past year since his father died. This is set up like a separate film, with credits and everything. It’s an unusual touch, and gives you a little more depth on Jack throughout the rest of the film (besides bringing its runtime from 90 to 105 minutes).

The movie proper starts with a businessman (Bill Murray) missing a train that Peter (Adrien Brody) catches. This is an interesting bit of color, because we can tell from Murray’s face that it’s potentially a really big deal to miss a train out there. This will come up a lot later. We’re then introduced to Francis (Owen Wilson), who basically lays out the plot: Jack, Peter and Francis have been estranged since their father’s death a year ago, and this is Francis’ attempt to re-connect them. 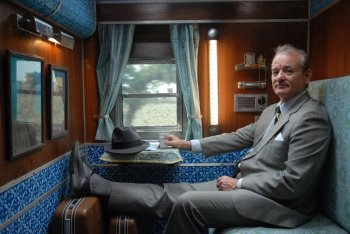 I think this is panned by real fast later on though.

Francis is the lynchpin here: He’s passively overbearing, acting more like a mother than a brother. The dynamic between the three of them is interesting. Peter sullenly resents Francis’ controlling ways, and sometimes strikes back, while Jack is more likely to try to smooth things over or just check out. He quickly seduces the train stewardess (the doe-eyed Amara Karan, A Fantastic Fear of Everything), and continually insists that his writing (all thinly disguised roman-a-clefs) are complete fiction not based on anything. (Meanwhile Peter’s wife is in her ninth month of pregnancy back in the States so avoidance is something they all do.)

Needless to say, nothing works out the way Francis has planned, with his tightly arranged schedule organized to create a spiritual enlightenment and bond between the brothers. But even Francis has another scheme: He’s brought them to India, he says, because where better to have a spiritual awakening? But the truth is, he believes their mother, who ran off some unspecified number of years ago (and didn’t come to their father’s funeral), is in a mission in India. 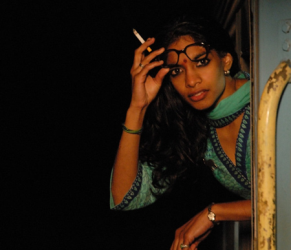 “Doe-eyed” may have been coined to describe this woman.

Mother, played by Anjelica Huston, is also an interesting character who, by every action, makes it clear she wants nothing to do with them, but when actually confronted by them, acts as though everything is perfectly normal and fine. In other words, there’s no reason given for her odd and hurtful behavior. As with Tenenbaums or any of Anderson’s other movies, people just are certain ways, and any attempt to explain it is likely to be rationalization or justification.

For all his noted whimsy, Anderson is probably on to something there. “Reasons why” given in movies tend to be really pat.

There is a scene before this last act, where the trivial problems of the brothers are thrown in to sharp contrast with the struggles of Indian villagers, which is the sort of major tonal shift The Boy and I praise so much in Asian films. We get to see that our characters are basically good people, but wrapped up in their own heads. And by the end, we get to see them get out of those heads, at least a little bit.

We all really enjoyed it. The Boy and I both liked the movie more this time. For myself, I found that I was less bored and irritated with the brothers’ behavior than I had been the first time. I was better able to see the good in them. That probably says more about me than the movie, but perhaps life’s little secret is that this is true of one’s reaction to every movie.

When your mom tells you she didn’t come to her dad’s funeral because she “didn’t want to”.