If nothing else, venturing out to see a French movie allows us all to sing a beloved song (from “The Critic”): 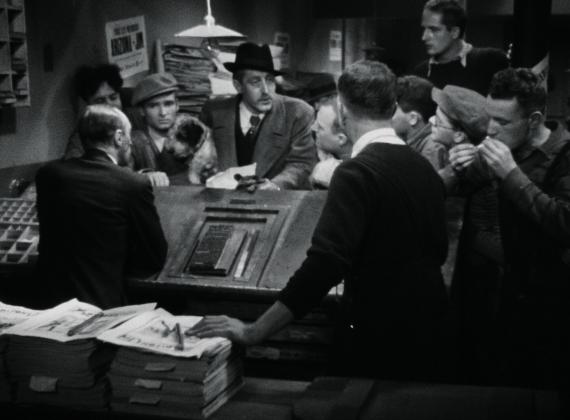 “It’s not boring and only a little pretentious!”

Three now, because The Flower will sometimes come with us, as she did in the case of this Jean Renoir classic from the ’30s, which is utterly delightful when it’s not horrifying.

This 80 minute crime comedy-drama begins when a girl, Valentine, brings in a wounded man into a roadside inn. They are fleeing for Belgium—the Land of Freedom in 1936, I guess—when they have to stop because the man, the titular Lange, needs to rest from his wounds. The tavern denizens quickly realize that he is a fugitive and discuss turning him in when the girl comes out and confirms their suspicions: This is the wanted man. And all she asks is that they listen to the story before deciding whether to turn him in.

It’s a fine device, and it hinges on one premise: The movie must convince the audience that the crime is worthy of being excused, particularly if the fugitives do not get turned in.

What follows is a cute and creepily French story of a little publishing company that is run by a disreputable lout, Batala. Batala is both crooked as the day is long, swindling people and raping women, and completely devoid of creative talent, publishing the worst hacky material that (besides being bad) doesn’t really sell well. Messr. Lange is an idealistic dreamer who has written stories about the adventures of an American cowboy in Arizona (a place he’s never been, and situations that are comically fantastic) but Batala is not interested. As creative as Lange is, he’s also Batala’s polar opposite morally, refusing to even slightly pressure one of Valetine’s laundry girls who’s in love with another boy—a boy she assumes will no longer be interested in her because she’s pregnant with Batala’s child. (Did I mention that Batala is a rapist? And this is a comedy?)

“She fainted! And I barely raped her!”

But while trying to swindle even more money out of some investors, Batala suddenly lights on the idea of shoehorning the investor’s product into Lange’s cowboy stories, though without telling Lange that he’s doing so. Lange gets his entirely innocent revenge when he neglects to pass on a message from one of Batala’s creditors and the crooked old man figures his jig is up. If Batala had had more time, he could’ve put them off, but since he doesn’t, he borrows as much money from everyone he can (including a girl he’s promised to marry) and flees town on the next train. The train crashes and Batale is listed as one of the victims (though the movie telegraphs something else is afoot).

Flash-forward a year and the little publishing company has taken off, mostly powered by the overwhelming popularity (with young French boys) of Lange’s cowboy stories which parallel the adventures of the actual company in a cute montage. The company itself has formed a cooperative (1936, remember, so we’re either socialists or fascists) and is doing well, down to where there’s interest in a movie about Arizona Jim.

At this point, Batale returns. When the train crashed, he stole the clothes off a priest he had been talking to, and lived as said priest for a year while things cooled off. If he gets access to the money Arizona Jim is generating, he figures all will be forgiven and he can go back to terrorizing his staff and raping the girls from Valentine’s laundry. In a fit of pique, Lange shoots him, and this is his crime.

So, yeah, it’s a delightful movie except for a few bullet points:

We’re American, of course, so maybe that’s just France: You can’t possibly stand up to anyone evil. You just have to keep working for them until you get so fed up you kill them. It’s weirdly infantile. But I would be far from the first noting that Europe in the 20th century was weirdly infantile. (And still is, really.)

“I couldn’t possibly expose your crimes or tear up the contract. My only option is MURDER!”

The Flower, who has been reading the Bible, and who has been hearing of the harassment in Hollywood keeps asking why there are no Levis around? (If you don’t recall your Bible—he said smugly having just read the passage in question—Levi and Simeon kill the men of an entire village and rape all the women when their sister Dinah is raped.) I’m not sure she got the customary message from that passage but I do sort of wonder myself where all the Levis are. (Jeans joke omitted.)

Not in France, for sure.

Jean Renoir, who directed the fabulous The Grand Illusion, kind of let us down here and mostly we came out confused. The very leftist sentiment of the film led to him making anti-Nazi films on behalf of communists and subsequently fleeing to America during WWII, where he directed This Land Is Mine with Charles Laughton and Maureen O’Hara. I’m guessing that’s a better film—or at least one we could relate to more.

Estelle (Nadia Sibirskaia) is confused because Lange (Rene Lefevre) doesn’t seem to want to rape her.