This is a first for the site, I believe: I took the kids to see a “throwback” movie for a movie The Boy and I had already seen and I had blogged about when it first came up. But the Swedish vampire flick Let The Right One In is a very interesting and different vampire movie which is typically (for Swedes) low-key punctuated by amazingly shocking moments.

The above-linked review still sums up exactly how I feel about the film, down the part that I don’t think worked. I still didn’t think it worked (and I had forgotten what I wrote 10 years ago, so I had to review that old entry to see how my thoughts held up). And I still won’t spoil it, though I will note that it is a very typical cinematic cheat (still).

The Boy had seen it originally and still liked it. I wasn’t sure how The Flower would feel about it, but she really liked it and didn’t have the same issue I had with That One Thing. It’s not that she didn’t see the problem, it’s just that she dismisses these sorts of things, sort of like how she can watch a film that doesn’t interest her on a narrative level by just looking at the visuals.

Trivia question that earned me a free ticket: The word “vampire” is spoken only once in the film. (I got this because somebody else guessed “zero” first, and was wrong…) 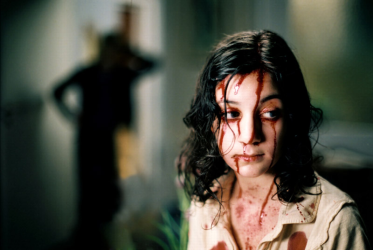 This is what happens when you don’t invite them in.