It’s time for Rifftrax! (Rifftrax!) And it’s not an easy job, they watch movies and they make up jokes about them. And tell those jokes to microphones. Or so the song goes. And this is true, except for the several times where they tell those jokes live to an audience (usually in Nashville).

As they did recently, revisiting a Mystery Science Theater 3000 “classic”: Timechasers. 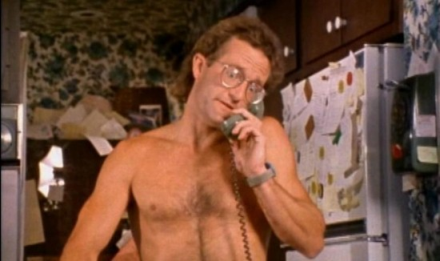 This time, it’s all for the ladies…

In Timechasers, a scientist with incredible luck (one assumes) and a remarkably small amount of imagination, invents a working time machine out of a small prop plane and a Commodore 64, but then can’t think of anything to do with it, except sell it to Evil Corp (a division of Destroido!) who then—through means that are never adequately explored—sells it as a weapon, creating a hellish future of…well, the remarkably contemporary looking warehouses and back alleys of Burlington, Vermont. 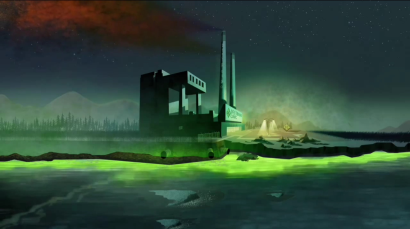 We are, of course, sympathetic to the low budget filmmaker, who is often honing his craft at the same time he struggles with budgetary limitations. And if writer/director David Giancola never exactly “got good” at this movie thing, he did, apparently get better.

Here, however, we see a near Birdemic level of unsophistication, though without that movie’s sheer amateur incompetence. The acting is wooden, but it’s recognizable as acting. The plot is illogical, and much like Birdemic, tied into man’s inevitable destruction of the earth. There’s an attempt to try to incorporate the “multiple timelines” aspect of Back to the Future 2.

Look, that was ambitious and not very successful either, though lord knows it was a gratuitously abused plot device throughout Star Trek incarnations. (To the point where, I think, it was the entire powering device of Enterprise.) The real risk of these things is that: a) You confuse the audience; b) You can do whatever you want, no matter how magical, so the audience knows you’re cheating. 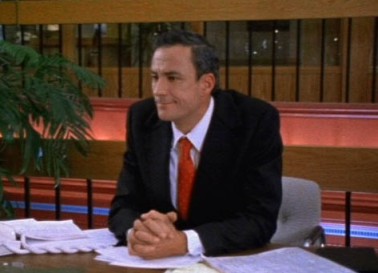 So, you’re saying in THAT timeline, Leah Thompson had big boobs?

But what about the riffs? Well, the riffs are good. Very good. That’s why we go to these things. They’re fun. But on the scale of Rifftrax, it’s not the best. There are a couple of places where it’s very hard to hear what’s going on, and because the sound in the film proper is out-of-sync, it makes a lot of dialog-based-jokes impossible. (The timing’s been pre-ruined by the movie.)

The Boy commented that he preferred MST3K-style movies, where the dialog leaves enough gaps to make quips without talking over the movie. And it’s true that Rifftrax uses a lot more “talking over” which allows for some funny bits on the one hand, but breaks the engagement with the film on the other.

And you do have to engage with the film somewhat. A lot of the best humor comes from expectations, or from someone pointing out an absurdity that you half-notice but can’t quite put your finger on. As in episode 305 of MST3K, “Stranded in Space”, where the guy helping out the hero drops his vial of the medicine he must have to survive and Crow says, “Note to myself: Pack more life-saving liquid.”

You have to be engaged enough in the actual movie to appreciate the absurdity. 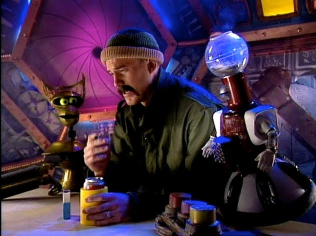