I’d been meaning to take the kids to see Clerks, so when it popped up last Thursday at one of our theaters, I did. So, how does a $27,500 shot-on-video static, talk-heavy movie hold up after over 20 years? 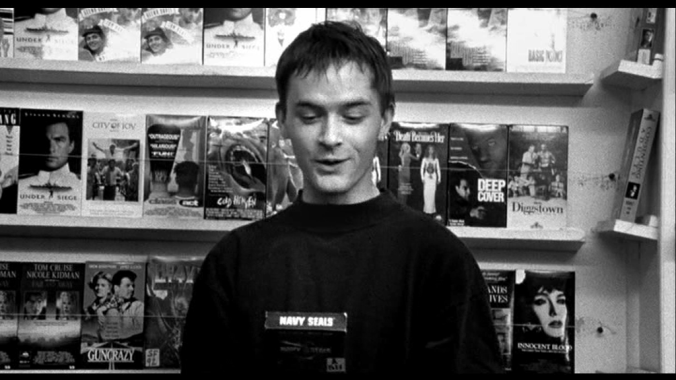 To this day, whenever the topic comes up, I say “Ooh! Navy SEALs!” just like this guy.

Dante’s still whiny and Randall’s still a A-league jerk, but they’re distinctive characters with a distinctive voice. That voice is Kevin Smith’s, of course—every single character at every turn talks like him, but that’s not a bad thing. I mean, if you find it amusing, which I do.

As did the kids. The Flower found it very funny while The Boy was also impressed by the editing and—after a fashion—camerawork. Smith is rightfully chided (and chides himself rightfully) on his atypical-for-his-generation lack of fluency with the camera. In fact, there’s a great moment in the commentary track on Dogma where he says something to the effect of “Some filmmakers even use the camera near exclusively instead of relying on dialogue”, and everyone else laughs, so he follows up with “No, seriously!” 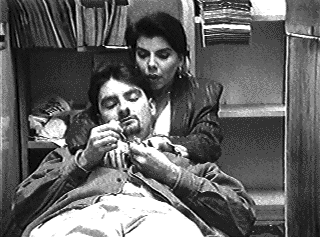 But this is a good shot: Tells us about the characters.

But that’s really more an issue for later films. In this one, this hard-scrabble pay-for-it-on-a-credit-card gonna-take-my-shot melodrama, we have a clear picture, clear sound, and some reasonably good (if static) shots, and almost no wasted time. It was nice to see right after 45 Years, actually, because it had so much that that far “better” (technically) film didn’t have. For example, both films have very representative soundtracks of their era, but you get whole songs in 45 Years while people are, sort of, emoting. Meanwhile, Clerks gives you a quick stinger and possibly some action (shoplifting, e.g.) or the song immediately gets pushed into the background again.

I’m reminded of another thing Kevin Smith said about brutally cutting down runtimes: That you do it for the audience, Paul Thomas Anderson. We could probably safely say that PT Anderson is a far more skilled director than Smith. And yet. Smith is trying to entertain the audience while Anderson “DGAF”, as the kids type into their phones these days. 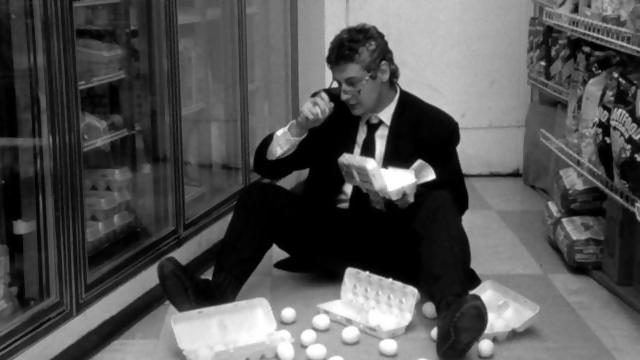 I feel as though Smith had some run-ins with guidance counselors.

Anyway, the story here is that whiny loser Dante is browbeaten into going to open up the liquor store where he works on a day he is supposed to be off. While there, he is insulted, humiliated, nearly lynched, and tricked. He gets into a fight with his girlfriend over sexual histories, but also is conducting a clandestine (though currently non-sexual) relationship with a high-school ex.

In the mix of all these trivial hijinx, there’s a ton of humor, good “dialogue” (I mean, it’s Kevin Smith monologuing, but still), and genuine character establishment with real arcs for Dante, and even a lesser one for his pal Randall. It’s got a lot of heart.

It’s also got a ton of swearing, salty language, sexual dialogue that probably should make you blush—to the point where this no-violence no-nudity film originally was rated NC-17—that’s actually still pretty raunchy over 20 years later. I was pretty shocked when I saw it the first time, not just due to the explicitness of the language but because sexuality is treated so cavalierly, even moreso than in the awful, awful teen films of the ’80s (which tended to celebrate promiscuity, where this is more ambivalent about it). 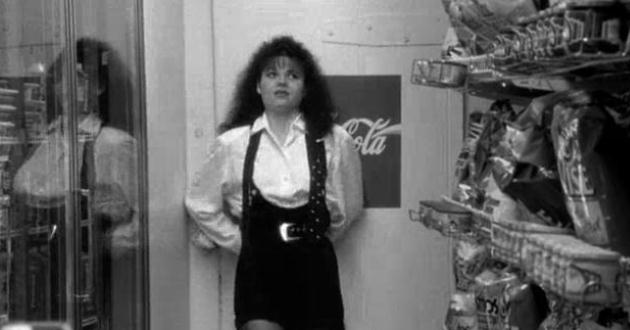 The acting is not as bad as I remember. Brian O’Halloran doesn’t seem quite as whiny as I remember him—might be a big screen factor. And the Jersey twang of Marilyn Ghigliotti (as girlfriend Veronica) didn’t strike me as harsh as it did originally. Jason Mews and Smith, as Jay and Silent Bob, actually seem more amateurish than I remember, probably because they ended up doing five more movies (with a Clerks III in the works, I think). Jeff Anderson probably does the best with the sometimes awkward dialog (“Why are you upset at its destruction?”).

It’s not for everyone, of course, and it’s not really a classic, in the sense that (I don’t think) people will be watching this 55 years from now like they do Casablanca. But it is still very watchable.

Especially if you’re bored on the job.