Big Ass Spider is a title that raises many questions. For example: Does Big modify Ass, signifying “extremely large”, or does it modify Spider, implying that you have a larger-than-usual ass-spider, a perhaps even more horrifying prospect. Or is, perhaps, the Ass meant as a noun, not an adjective, meaning that it’s the sort of spider that only takes up residence inside the sort of derrieres that Mr. Mixalot would approve?

Of course, it raises none of these questions. It’s merely another low-budget creature feature in the mold of such SyFy films as Sharknado and Mechahalibut vs. The Conqueror Worm, which isn’t in fact a real movie, yet, but give them time.

In fact, The Boy complained that this was basically Arachnoquake, especially in the final act, and thus rather devoid of all suspense.

In the chair is Mike Mendez, behind one of the best of all After Dark Horror Festival films, The Gravedancers. In fact—and somewhat inexplicably—this is his first film since that 2006 flick. Mendez is good, if for no other reason than he seems to really care about the product, and also not regard the audience as idiots.

He’s also very good at the horror while also being good at the comedy, which is a tricky balancing act. His movies tend to remind of the best Corman/Griffith collaborations (like Little Shop of Horrors), with heavy Raimi overtones and even a touch of Whedonesque.

So, within the straitjacket of this low-budget giant-monster flick (the limitations of which are so obvious, you’d think the money guys would give the creative guys a little more freedom), what do we get?

Well, powering the film is a buddy picture with Greg Gumberg as an exterminator (Alex), and Lombardo Boyar (Jose) as the hospital janitor who ends up buddying with Alex, and providing most of the workable ideas, as they drive around L.A. in pursuit of a the eponymous arachnid.

It was nice to see Clare Kramer (of Gravedancers) turn up here, even though the romantic subplot couldn’t have been more perfunctory. It had some nice touches but Gravedancers had a much better triangle, and this felt like “well, there has to be a love interest, and the two have to get together at the end.”

There’s actually a kind of unevenness that this shows up: Alex is supposed to be kind of a dunderhead, with José giving him the good ideas, and Kelly (Kramer) is supposed to be a hard-bitten lieutenant (in the Giant Insect Defense Corps, presumably) who is initially turned off by Alex’s goofiness but who is ultimately won over by his astuteness and bravery.

Well, I guess his bravery isn’t really in question.

If I were to hope for a sequel, I’d like to see Kelly back and the two of them having romantic difficulties. (A sequel involving a giant cockroach is set up by the end credits.)

Anyway, the high points of the film are the effectiveness of the very early scare scenes involving very small spiders that don’t look blatantly CGI, and the switch to light humor and action once the blatantly CGI Big Ass Spider appears in the park.

The park in the middle of L.A. where bikini-clad girls play volleyball, apparently, and which I do not know where it is but wish I did.

Anyway. That was another kinda fun part: Seeing L.A. destroyed by a big spider. Not as good as Volcano, in that regard, because the effects—

Eh, I’ll stop bitching about the effects. It used to be that low-budget horror movies understood that their effects were bad, so that they used them sparingly. The last 15 seconds of Corman’s Haunted Palace utterly destroys the otherwise fine, atmospheric film with a 2D model of something like Sigmund The Sea Monster filmed with a wavy effect. But at least it was only the last 15 seconds.

Anyway, I said I’d stop bitching. And one day, maybe, I will.

Inexplicably, the movie features Ray Wise and (briefly) Lin Shaye (who were co-stars of the ultra-creepy Dead End) and Patrick Bachau and, explicably, a cameo by Troma found Lloyd Kaufman.

Again, the thing that makes it work, to the extent that it can escape the SyFy Formula Ghetto, is that at frequent intervals, there’s something little that’s somewhat unexpected, something funny—not much scary after the first few scenes, sadly—something that says, “Hey, we’re not just here to collect a check.”

I remember the Sharknado screenplay guys joking, while the movie was airing, that they’d have the script for the sequel done by the time the airing was over—but that’s only half-a-joke. They’re making crap, they know they’re making crap, and they’re just kind of riding a wave caused by a brief burst of over-the-top creativity that they then completely fail to follow-up on, producing a movie that just goes through the motions.

It’ll probably be overlooked, but you can really tell the difference. A producer with half-a-brain would give Mendez a bigger budget and even more creative freedom and see what he came up with. Also, he’d make Gumberg and Boyar into a light X-Files-Meets-Tremors TV series. But I don’t know how many producers can meet that fraction of cerebral mass.

OK, I’m done. It’s not great. It’s way better than Sharknado. There’s a lot of talent that could be unleashed here.

Oh, I didn’t know this was the Gravedancers guy going in, I should note, even though in retrospect, the movies remind me of each other.

Extra shoutout for Lombardo Boyar, who plays his character just right, as a sort of an admiring Sancho Panza to Gumberg’s Quixote.

Also, this has the most unusual product placement I’ve ever seen in the film, with Alex running around in a Western Exterminators van. 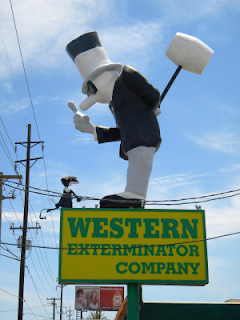