What’s this Pacific Rim movie about? I think it’s best summed up by this poster the North Hollywood Laemmle had up: 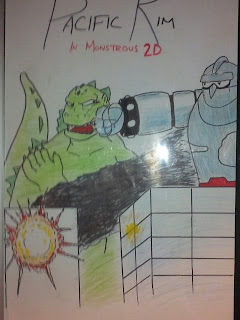 Actually, the only way Pacific Rim could’ve been better is if it had featured Gigantor beating up Godzilla.

After Man of Steel, I was basically never wanting to see another big-budget CGI summer blockbuster ever again, but I love me some Guillermo del Toro and, despite bad box office, the buzz on the movie was very solid indeed.

The premise is unapologetically Japanese Video Game-y, with the earth under assault by Kaiju, monsters who emerge from the ocean (via a gate to another dimension) to terrorize shore cities. In order to combat the Kaiju, earth’s governments band together to create Jaegers, giant robots which must be controlled by two psychically linked pilots.

The frequency, power and quantity of kaiju incursions is on a rapid increase, so level up Kaiju pilots!

Here’s what works in Pacific Rim:

Think about that for a second: A movie about giant robots and monsters fighting—a movie that would not exist without CGI—actually shows tremendous restraint, and avoids the 20-minute-combat set pieces found in, say, Man of Steel.

Also kind of astounding, in a movie that sets up the “save the world” plot from scene 1 is actually focused primarily on the (melo)drama of the lead characters. The psychic link is a convenient shortcut for the sort of bonding you get in more realistic combat movies. This makes it more engaging than either Man of Steel and (most of) World War Z.

Nothing super-shocking, but not a straight shot from first punch to final boom.

You don’t usually get any kind of surprise in a blockbuster as to who is going to live or die. But this was almost horror-movie-esque. (More on this in a moment.)

More on this, after we cover the bad, too.

Maybe it’s not the acting, exactly, but there’s not a lot of charisma on screen here. A movie like this needs a William Shatner or a Nic Cage even selling it. ‘cause, you know: silly. Suspension of disbelief hard-strained.

OK, this bugs me, though obviously, in a movie about giant monsters fighting giant robots, engineering isn’t a big deal. And there’s a typical (enjoyable) comic book logic that leads one to the path that says “Yes, giant robots are, of course, the way you’d fight giant monsters, because you couldn’t possibly deliver the same or far worse damaging payloads from long ranges with missile and plane attacks.”

That aside, the actual combat is about at the level of Toho’s Godzilla movies and, truth-be-told, most action movies these days: We have a fight until the plot necessitates some resolution, and the damage done is exactly what is called for at any moment.

I’m not complaining, in the sense that of course that’s the way it would play out. Why spend a few thousand dollars of your $200M budget to try to make sense? Whatever you came up with to tie things together with some semblance of coherence would get taken about in one of the draft processes any way.

But it does distance me. It’s not even that I object to being awkwardly manipulated, it’s that this stuff is so clumsy as to be completely ineffective manipulation.

Probably the worst thing is that this movie about giant monsters fighting giant robots isn’t even the worst offender of this variety.

This aspect of the film was interesting. Ron Perlman was the only actor I could name in this film, and he’s typically B-movie fodder, though he played Hellboy, the beast in the ’80s “Beauty and the Beast” TV series, and a caveman in Quest for Fire.

He’s usually in makeup, in other words.

But this allowed them to make the results of the movie somewhat less predictable. It made the horror movie-esque aspect possible, or at least more likely. And it doubtless knocked $30-40M off the budget.

It may be why there was no really compelling charisma there. The Japanese girl, Rinko Kikuchi (who was in one of my favorite films a few years back, The Brothers Bloom) is a good mixture of vulnerability and moxie, and Charlie Hunnam (Children of Men) strikes the right notes as the humbled hero. Even Idris Elba (Prometheus, the black Norse God in Thor), whose role is the most egregiously clichéd, pulls it off.

I don’t know if it’s the acting per se, really. But there’s a lot more genuine chemistry in del Toro’s Hellboy movies. This may be one place where the scale actually did hurt: There’s too much space for the camaraderie to fill. Also, the characters end up dying at an alarming rate, long before you can care much for them.

Weirdly, this might need a four hour director’s cut.

Anyway, The Boy, who hates this kind of stuff really and truly enjoyed it. I mean, he saw the original Transformers movie when he was about 10, and hates it to this day, and leans against the big, dumb action flicks that are aimed primarily at his demographic. But this won him over, I think due to a general lack of pretentiousness, and a degree of respect for the audience.

It’s bombed here in the U.S., looking like it might just barely clear $100M, but it’s earned twice that overseas, such that we might actually get a sequel.

So, I guess the recommendation is: If you can like a movie about giant monsters and robots fighting, this is probably a movie you can like.