Well, it was stagey but not actually as stagey as Anna Karenina. So said we after witnessing the taped version of an actual stage play for Great Expectations. This was the culmination of a long tour chronicled here.

And the actual play is, y’know, under two hours so there’s zero need for an intermission. I mean, Peter Jackson is a kiwi, but I assume news of the length of his movies has reached England.

Now, about the play: The executive summary is Charles Dickens meets Tim Burton. They reference this a couple of times, with hasty assurances that there is a long Gothic tradition to draw on, but let’s not pretend: This is the Weird One’s influence, down to closing music that sounds like Danny Elfman could have written it.

The next thing—and this seems to be a thing with plays of late—is that changing sets is hard so we’re just not gonna do it. I don’t disapprove. It puts a heavy burden on the actors, writer and director but if they’re up to it (and they are) it can work.

So it all takes place in Miss Havisham’s dining room, decayed wedding cake still on the table. 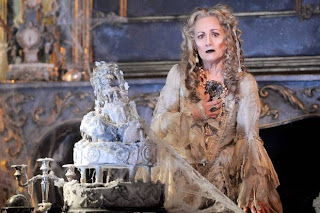 This, as noted, is stagey. But, hey, it’s a stage play. So, you know: appropriate.

The acting is, naturally, top notch. And the fact that scene transitions are basically done by using lights to shift focus from one area of the stage to another—without a lot of time-costly character entrance and exits, and moving furniture—means that things can go at a breakneck pace without actually feeling rushed.

A few things early on felt a little awkward but I wasn’t sure if that was me getting used to it, or the fact that it is a kind of awkward story, or there were just decisions about how to play things that didn’t quite work. Everyone’s made up like Tim Burton’s Alice In Wonderland but that, of course, has a different effect when you’re actually in the audience versus watching a filmed version with close-ups.

It’s good. It’s all done as a flashback, with the grown-up Pip observing the proceedings as his younger self moves through them—kind of an endurance trial for an actor, being on while almost never being the focus.

Except for the “Entertainment Tonight” style filler, we all liked it. Though The Flower couldn’t resist punning: “I had high hopes for this.”