One of Roger Corman’s favorite budget-saving tricks was to film two movies while on location instead of one. The second film was done on a shoestring-budget–an even stringer-shoestring budget than the first, shot quickly and sometimes without a full script. And sometimes, they were better than the higher-budgeted flick.

Such is the case with Creature from the Haunted Sea, and its twin The Last Woman on Earth. TLWOE is a perfect example of what makes a post-apocalyptic movie attractive to the Z-movie director: It has a cast of three and one of the three is the screenwriter. 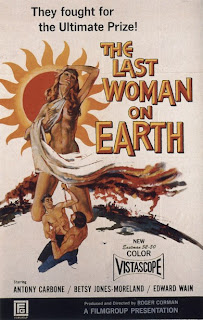 Said screenwriter is no less than Robert Towne, best known for having written Chinatown and Bonny and Clyde. And while this isn’t his finest work–and as you might imagine this is a pretty talky flick for a post-apocalyptic thriller–it acquits itself fairly well.

Two men. One woman. The woman is the last woman on earth. Gosh, it practically writes itself.

The worst–and best–part of this movie is the fetching image of Betsy Jones-Moreland on the poster. As lovely as she is, she never quite finds herself in this state of dishabille.

Another cool thing about the movie is that it’s Public Domain. Watch it for free or download it from the Internet Archive.

Until next Monday, mutants, stay radiated!