Get Smart was still playing and a movie was needed. The new Mummy flick doesn’t look too good, and 3-D doesn’t work for me, ruling out the other Brendan Fraser.

The movie is not as funny as the old show, but in fairness, the old show isn’t as funny as it once was. As a summer movie, it’s good fun, with wall-to-wall comedian cameos; as nostalgia, it’s not bad, there are some good references to the old series; as a sitcom remake, it’s one of the better ones (if not the best of what is a horribly weak field).

They made a lot of good choices. Instead of Maxwell Smart being a complete boob, he was a highly competent desk jobber who wanted to be an agent, but was too good at his data crunching to be field agent. And actually, many of his failures were not in execution, but in timing or just plain luck.

This…works. If you recall the original series, Don Adams’ Smart was a constant goof. But in order to forward a plot with an incompetent protagonist, you have to rely on others (which diminishes your lead) or you have to rely on luck, which gets tiresome. Adams did both, which was fine, because the series was composed of 22 minutes shows, stuffed with sight gags and other absurdities. This movie gives Smart enough skill to make him less irritating than he might have been.

Carrel is just right. He could do a fairly good, dead-on, Don Adams imitation if he wanted. But that wouldn’t have worked for a number of reasons. First of all, it’s weird. The guy’s dead, but only for about five years. Second of all, the original character wouldn’t have fit due to the changes made in the setting.

Like an Owen Wilson or (in most cases) a Will Ferrel, Carrel has created a persona that works in a wide variety of situations, and that means he can do the goofy stuff and switch into a more serious–though never too serious in this movie–mode. In this movie, that means, completely missing a stunt on the one hand, and then moments later doing something competent, and then doing something movie-competent (like avoiding lasers with Olympic-level gymnastics).

The movie walks this line, too.

In the originl show, you had to sort of wonder what Agent 99 saw in Agent 86. And Barbara Feldon can hardly be commended enough for convincingly conveying real love in an absurd sitcom. I’ve heard people–guys–pining for her decades after and in retrospect, it’s probably because she managed to adore Agent 86 and respect him, even though her skills were far superior.

Not really my type, I do see the appeal. Now compare her to Anne Hathaway, also not my type. 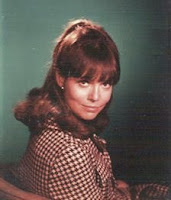 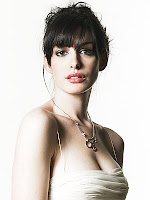 I’m putting these here because I these pictures may say something about changes in taste, at least as presented by Hollywood. Beauty, in the ‘60s, had a rounder face, and smaller nose and eyes, as this picture of Feldon doesn’t actually illustrate all that well.

Hathaway is more in the Julia Roberts/Uma Thurman mold, with a longer nose and wider mouth, to say nothing of enormous eyes. Her eyes are so strikingly large that it’s easy to forget she’s not really my type. (Not that she’s been hounding me for attention anyway.) Is it just my imagination? I see more Hathaways than Feldons these days.

Anyway, I don’t really “get” the appeal of Hathaway. When I see her in a movie, I think, “Why’d they pick her?” And then at some point during the movie she wins me over, as she did here. Right about the point she donned a 99 wig and was doing the goofy laser-dodging thing that’s been all the rage since Entrapment, and actually gave us a husky voiced (momentary) Feldon imitation, I was swayed.

The supporting cast is superb: Dwayne Johnson as the uber-buff super-agent; Alan Arkin–man, this guy’s been funny since before I was born; Terence Stamp just-so in the Bernie Kopell role as head of KAOS; the versatile Terry Crews; Masi Oka and Nate Torrence as the uber-nerds; Ken Davitian as Stamp’s lower-key right-hand man; and the ginormous Dalip Singh as the sensitive crusher, whose domestic problems make him grumpy at work.

On top of that, we got cameos. Bill Murray as Agent 13. Patrick Warburton as Hymie. James Caan as the Presdient. Larry Miller and Kevin Nealon as agents of a competing bureau. Etc. What’s cool is that they’re not just gimmicks. Everybody does a good job both fitting in and being funny in their own ways.

It’s fair to criticize the movie for not being funny enough. One character appears to get killed–in a non-funny fashion–and that felt wrong. The original would’ve shown him in tattered clothes and smudge-faced, I think. (Though if memory serves, the original show did have people dying, but off-screen due to some sort of “missed it by that much” deal.)

But ultimately, this movie works pretty darn well, has a lot of the spirit of the original, and showed proper respect. Name a movie based on some other ’60s sitcom that does the same.