Two, count ’em, two Chinese movies playing in Alhambra, and at the AMC which meant another month of squeezing value out of their $25/mo A-List service. But there was a rub: The last movie (Line Walker 2) got out five minutes after the this one started, and A-List doesn’t let you book overlapping events, which I can understand in principle. But, come on: A modern movie has a good five minutes of credits on it!

I struggled with it a bit. Then when Line Walker turned out to be 98 minutes long with credits, well, I was in a bind. It still wouldn’t let me book the film, even with a solid 20 minutes of spare time prior. But I’ve paid for this service. I could’ve tried to resolve the issue with the management but, come on, what’s a branch manager going to do about it? Best case is she—I don’t know why it would be a woman, but there it is—lets me in anyway. Worst case is she doesn’t.

So we just sat down. Even though the principle is not damaged (we did not take anyone’s seat or displace any money, except maybe as far as recompensing Ne Zha‘s producers), I was not thrilled with the situation. I mean, I’m the guy who went to the After Dark Horror Fest year after year with The Boy and bought eight tickets, one for each movie, even when all I had to do was sit there and wait for the next to start. (At the time it worked out to about $200. Yikes.)

Then, after all that, as the credits started to roll on this one, I thought “Have we made a terrible mistake?” I mean, this is a kids film. And kids films are always risky, except for a few brief windows: Disney flicks in the ’90s, Pixar’s in the ’00s…uh…Disney Flicks in the ’50s…

I mean, it’s kind of funny because kid flicks have legs, you know? How many generations have watched the 1938 Snow White and how many non-kids can still enjoy those films. The best ones tend to be timeless because they’re not constantly bumping up against pop culture references (that the kids wouldn’t understand), politics, or complicated (and often bad) messaging.

But the bad ones, oh, Lord. They’re bad. And some of the CGI here is shall-we-say lower-budget looking compared to American fare. And yet.

Bit by bit the movie won us over.  Again, I am profoundly struck by how much freer Chinese movies feel compared to American ones—and this is compounded by the fact of being a movie for children. First, though, a quick look at the plot: 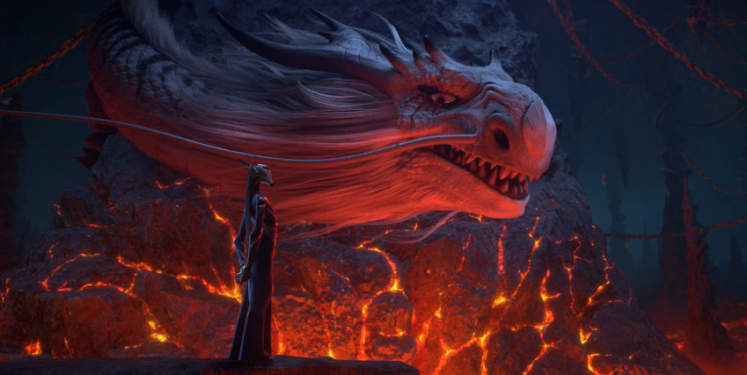 Buckle up, this is gonna get hairy.

There is, in the heavens, a Chaos Pearl which can absorb heavenly energies. But it gets out of hand, so the Heavenly Father, Tianzun, sends two of his minions, the goofy riding-a-flying-pig chubster Taiyi and the lean and serious Chen to subdue it. It’s too powerful, though, absorbing all the energy they can throw at it, and Tianzun has to handle it himself, which he does by splitting it into its Spirit and Demon orbs. (Called “the Spirit Pearl” and “Demon Pill” in the subtitles, which has that kind of amusing pidgin-y sound you sometimes get on the mainstream Asian films.)

The Spirit Pearl is going to be given to Li Jing, the human lord guarding Chengdu Pass, who protects the human world from demonic onslaught. His wife will give birth to the reincarnation of the Spirit Pearl, whereas the Demon Pill will be smote by lightning in three years, destroying it. As a reward, if Taiyi can manage to watch over this process and make it all come off okay, he gets a spot on the Heavenly Council. The serious and, let’s face it, evil Chen is not having any of this, so he sets out to sabotage the process.

Which he does, by swapping out the Spirit Pill for the Demon Pill such that Li Jing’s new son ends up being a demon. Meanwhile, Chen gives the Spirit Pearl to the dragons, who have been chained up for eons since being defeated by the gods. The Spirit Pearl incarnation only needs to destroy the Chengdu Pass guardians (the castle and all the villagers) to free the dragons.

So there’s your setup, all done in the pre-credits opening. (Yes, the credits are up front, which I liked because the title guys are very creative.) Ne Zha is a demon by nature who is destined to destroy humans but is being raised by demon hunter parents who will do anything they can to save his life—remember, he’s going to be struck by lightning in three years. (He’s pretty much an eight-year-old throughout the movie.) Meanwhile, the “good guy” is being trained by dragons to murder a bunch of people.

It’s a good message: Be what you want, not what your “destiny” says you should be. And it’s one, more or less, that would be at home in an American kidflick, too. But then things get weird. And by “weird” I really mean, “not weird” because Chinese political correctness is not at all concerned with American SJW neuroses. To wit:

This last is an interesting characteristic of Chinese films generally: There will be comic relief characters who are as broad as you can imagine. But whatever trouble they cause, they’re going to have a moment which reflects the goodness of their true nature. Nobody exists just for yuks—not even shrieking dude.

He’s lazy, he’s a buffoon, but he has his moment of true wisdom.

There are a lot of fart jokes, and I laughed at them, not gonna lie. I’m tempted to say there was a philosophical theme behind them, as farts actually play a pivotal plot point, where they win the day versus, em, more conventional means of propulsion. But sometimes gaseous expulsions are just gaseous expulsions. I will say, however, that a lot of slapstick works on more than one level. Every mother ultimately feels like their son (or sometimes daughter) is a little fire demon, smashing into everything and everyone with gleeful abandon.

In fact, a lot of this feels very “boys will be boys”-ish. The Spirit Pearl child, Ao Bing (who is adult-sized) is serious, dedicated and conflicted, and the two “children” end up being each other’s only friends, because they’re the only ones not afraid of each other. They bond over hacky sack which, if you didn’t know (and I didn’t), is a traditional Asian sport, in China known as jianzi.

The Boy noted the combat scenes were exceptional. I’d compare them to animated combat scenes in kid movies but our kid movies don’t have much combat (except superhero movies), and these hold up to the best of those. There’s a very good command of space and motion that makes it feel more true.

Worldwide, Nezha is in the top 10 for 2019, and has the #1 box office for any non-English film, so it’s probably exemplary in a lot of ways. But I’m guessing the filmmakers’ relative sense of freedom is the same no matter what: Probably the Chinese filmmakers get approval from Beijing and know that they’ll be fine within those parameters. In America, you never know what the next thing that offends someone—thus necessitating a human sacrifice—will be. And I think creates a nervous tension that permeates a great many of our movies.

I mean, who to root for?