We’ve had mixed luck, at best, with the whole “Oh, traffic is so bad, let’s stay and watch a movie instead” approach. And “mixed” is probably being generous. Not only are the movies disappointing, frequently, the traffic hasn’t let up by the time we’re out. 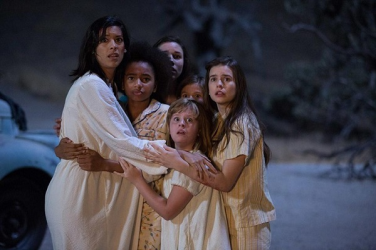 And in this case, it worked out all right. Annabelle: Creation is not, in fact, a sequel to The Conjuring or The Conjuring 2 but rather a prequel to Annabelle—which we never saw. Heh. It’s part of the same “cinematic universe” as they style it in these bloated, grandiose days, but it’s really only a kind of pseudo-continuity explaining how the evil doll featured prominently in those other movies came to be. This, apparently, was why David F. Sandberg (Lights Out) agreed to direct it in the first place.

It’s a little disappointing, in the sense that Lights Out was kind of fresh-feeling and had the weird kind of internal logic that the best horror movies have, and this—The Boy commented as we were leaving, and it was exactly what I was thinking—is a “funhouse horror” type flick, only with a sort of really heavy theological undertone that feels somehow inappropriate.

If you’re not familiar with the idea of “funhouse horror”, it’s a term I coined to describe horror designed solely to provide momentary, transient scares, like a funhouse ride. It’s the kind of movie where, one something happens, you think “Why did that happen?” and the answer is “Because it was scary.” Occasionally, as here, there’s an idea that the purpose of fear is fear, and the meta-explanation (“because scary movies should be scary”) has an “in-story” explanation as well (“the demons feed on fear”, a trope I’ve used myself on occasion). But this usually feels like a thin rationalization for producing often very cool imagery and scares. (And can be beaten to death in films like all the original Friday The 13th movies.)

This is not an insult, by any means. Some of our favorite horrors are funhouse: Phantasm, Autopsy, A Nightmare on Elm Street and so on. It’s completely legitimate, just like a comedy movie that just makes you laugh is legitimate. 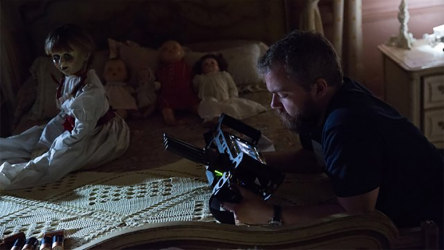 For example, there’s no reason for this contemporary camera man to show up in a 1950s girl’s bedroom.

It’s a little off, here, though, because the Conjuring universe is a heavily Christian one. The Warrens (the paranormal detective couple from The Conjuring) were devout Catholics, and their sensibility—which is well respected in the movies—is more akin to The Exorcist than modern areligious horror. This is “hold up a cross to defend yourself” and “fear for your immortal soul” territory, not the more materialistic “the boogen’s gonna get us” stuff where any reference to souls is basically a transparent exaggeration meant to ramp things up.

It’s also a little off because our victims in this case, are children: Orphans who have been relocated from their orphanage to the house where Annabelle was made. Having children (not teens) endure pain and suffering, and to ultimately be the victims of demonic possession and torture, tends to take things out of the funhouse and (again) back into The Exorcist territory. 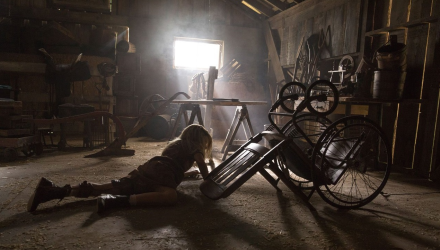 Tormenting handicapped children is dangerous ground, is what I’m saying.

I’m just giving you all this to point out that the movie was weighed down a bit by its own universe. Otherwise, it’s a fine, fine funhouse horror. These guys—and I assume Sandberg had some input from James Wan (Saw, Death Sentence, Insidious, the Conjuring, etc.) and his crew—really know what they’re doing as far as atmosphere, timing, misdirection, and even character development. It really feels like it’s part of that same “universe” even as Sandberg puts his own style on it, which is good.

The funhouse feel works against a bit it in terms of escalation and suspense. The end feels like “we need a boffo finish” more than anything that proceeds from the previous events, but a film truly committed to the funhouse ethos can go balls-out crazy which wouldn’t fit in here at all.

Australian actors Anthony LaPaglia and Miranda Otto (Eowyn from Lord of the Rings) provide the adult supervision, of sorts, to the gaggle of girls they’re hosting, and there’s some really fine acting amongst those lovely young girls, who basically have to carry most of the dramatic and horror aspects of the show. We liked it, but we had the same slight disappointment relative to both the quality of the other Conjuring movies and Lights Out, but I think it’s fair to say (without having seen it) that it’s far better than its predecessor, which is the strange world we live in these days. 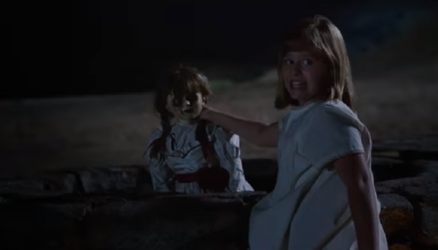 “One more step and I make another sequel to ‘The Ring’!”