Another classic film I had never seen, and another film—seen just a few days after From Here To Eternity—that had a positive view of the American military. No big surprise, I suppose: Post-WWII America was pretty high on its role as saviors of freedom. (The current narrative, apparently, is that we were the good guys in WWII, and then we flipped around to being the villains in the ’50s. Because Communist propaganda is that good.)

But in this film, our heroes Bing Crosby and Danny Kaye, decide to “put on a show” to help out their retired general, whose Vermont inn is floundering because there’s no what? You guessed it: No white Christmas. They stumble across it when Kaye decides to try to fix up business-minded Crosby with the delightful Rosemary Clooney, while the ridiculously cute Vera-Ellen sets her cap for confirmed bachelor Kaye.

Though, honestly, the big scene which—I am not making this up—features enlisted troops singing a song of love for their general? Choked me up.

You’d think I’d get tired of saying it, and you’re probably sick of reading it but: Couldn’t be done today.

As for this movie, I wasn’t sure where I was gonna fall on the whole liking it/not liking it thing. (I’m prejudiced against ’50s films, I admit. This may have to do with them being on TV all the time when I was growing up, and me not liking TV.) But it is delightful. The Flower loved it, of course, but I was surprised at how much The Boy liked it, too, not being that musically inclined.

But back in the day, they made these movies to be funny and frothy and life-affirming and not too serious. Like classic romantic-comedies, you know that the guy and the girl are going to end up together, and it’s all going to work out—that’s why you go! The journey is the thing. And the journey here is a lot of fun.

Bing and Rosemary in the dressing room.

A lot of great song and dance numbers, though the original songs are not really great. The songs that really stand out, like “White Christmas” (which had already won Berlin an Oscar in ’42—that he presented to himself!), “Blue Skies” and “Heat Wave” were already classics. “The Old Man” brought a tear to my eye, for sure, but that was contextual more than the song itself. “Sisters” is another fun one that I don’t really remember much. And “Snow”—The Boy and I didn’t think that one worked well at all. I kind of liked it because it felt sort of experimental, but I’m not sure the experiment was a success.

The principals have buckets of star power, though, that still carries through to this day. Dean Jagger is utterly believable as the retired general—though he was the same age as Bing Crosby. The delightful Mary Wickes, who worked to the last days of her 85 year life was, always, a wonderful screen presence.

Mary Wickes about to start something.

I was unaware of Vera-Ellen prior to this movie. Beautiful and talented, I kept thinking “Oh, wow, she’s so skinny.” And the blessing/curse of the Internet is that I could look her up and see how she was anorexic and suffered terribly after her short career. But here? She’s remarkable. (Also, as with everything on the Internet, the whole “anorexic” thing maybe just a poorly sourced rumor.) Holds her own with Danny Kaye just fine, singing and dancing and matching his frenetic comic energy perfectly. And so, so cute.

The sum, I think, is greater than all the parts, and you end up walking out of the theater happy, which is not a bad thing to say about any film. 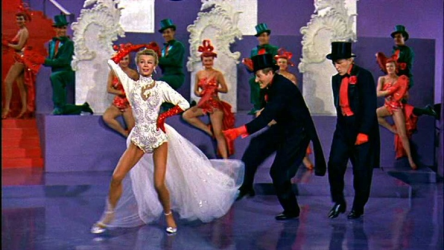