I had some serious reservations going into this Maggie Smith vehicle (heh), looking as it does like the most Oscar-bait-y of Oscar-bait films, and probably the sort of thing that trots out tired old British class warfare tropes and maybe even some typical anti-religious stuff. And, well, it sort of does all that, but not as much as you might think, and it manages to succeed because it so carefully treads the line between sentimentalism and cynicism, while giving us characters who are somehow relatable despite the severity of their flaws.

Our two principles are, of course, Dame Maggie Smith as “Miss Shepard”, the Lady who inconveniences the nouveau-bourgeoise by parking her shabby van in front of their houses, and Alex Jennings as modestly successful playwright Alan Bennett who finds his living space increasingly encroached upon by the itinerant ex-nun. 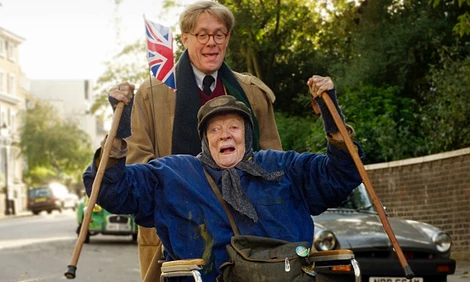 This picture could give you the completely wrong idea about the film.

The movie wisely never tries to give us a “And that’s why the Lady is a tramp” moment. We instead get moments of pointillism, her history revealed in fragments that in turn reveal a character who is abused by life in some ways, and who abuses life in her own fashion. The trigger moment happens in the film’s opening, when a (younger) Shepard is driving and gets into an accident. She then, apparently, lives the rest of her life incognito, on the run from the law.

Which is, of course, ridiculous, but apparently happened.

The movie uses a couple of fairly effective conceits: Bennett talks to himself, with Jennings literally appearing on screen in two places to represent the living Bennett vs. the writing Bennett; Also, the living Bennett will break the fourth wall to chide the writing Bennett for taking liberties with the story. The actual Bennett, who worked with director Nicholas Hytner on The Madness of King George and The History Boys, even makes a very meta-appearance at the end, watching as they film the final scene. 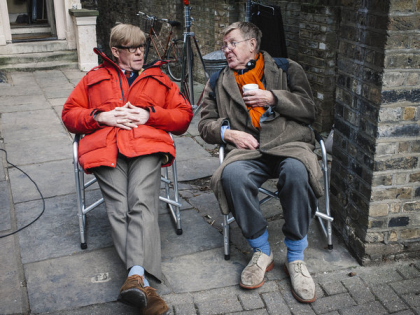 The actor and the playwright. Through the power of movie magic not seen since “The Parent Trap”, Jennings plays two aspects of the playwright’s personality.

There can be no doubts where the actual Bennett stands, of course, as he suggests that the poor were neglected in the ’70s and England—but even more now, somehow, proving, I guess, that no matter how much money is spent, it’s in no ways remediating of the populace in general, who are to be pilloried and shamed for not doing enough. However, Bennett is good enough a writer to leave those comments for interviews outside the movie.

There’s also no great self-congratulatory talk here. We don’t get any idea that Bennett likes Shepard, nor even that his actions are done out of anything more noble than severe English diffidence, bordering on cowardice. He comes into conflict with the social welfare system, and clearly doesn’t think much of it—which puts the actual Bennett in the awkward position of just bitching that we should “do more” about the poor, without any real concept of what that should be. And he particularly rejects the system’s notion of him as the “primary caregiver” of this woman.

In America, she’d probably have sued him (or some activists would have sued him on her behalf) after a few weeks in the driveway. Eminent domain and all. 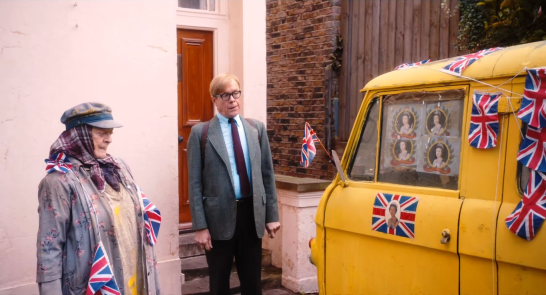 In America, every homeless person has an inner Trump.

Anyway, point is, Bennett has a lot of misanthropy to go around, from her, to his neighbors, to himself, and to the blackmailer (played by Jim Broadbent) that he changed from a vagrant to a cop—a change he didn’t break the fourth wall to tell us about. But he has a fair amount for himself as well, which somehow endeared him to me, just as Maggie Smith’s relentless lack of concern for whether people liked her, and her absolute rejection of the notion she was being helped by Bennett, made her more endearing.

At the same time, I can see why that might push the Rotten Tomatoes down into the 70s for audiences, where critics rate it in the 90s. I don’t know: I guess I felt the story worked hard to portray difficult people unapologetically and with dignity. That grants a lot of points in my book.

The Boy, however, also liked it quite a bit, and was also pleasantly surprised, so you might check it out. 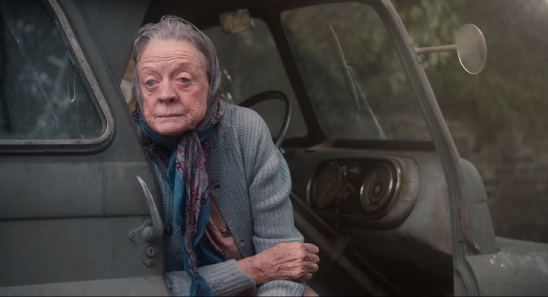 No Oscar for Dame Maggie, though.